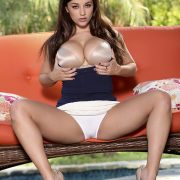 Lilly worked as a waitress for a local restaurant where she met a very nice couple named David and Kristen, who were looking for a housekeeper. The couple came into the restaurant often and they always requested that Lilly be their server. They loved her personality and found themselves drawn to her.  David and Kristen decided to ask Lilly if she would be interested in being their housekeeper. They did not hesitate to mention how well the job would pay. Lilly thought about the offer over the time the two spent at the restaurant. Before they left they asked if she had made a decision. She had. Lilly decided to take the offer.

After exchanging information and scheduling a time for Lilly to come and check out the house, the couple left the restaurant and headed home. Lilly was scheduled to work at the restaurant for two more hours and she would go home and change before heading to David and Kristen’s. Once she got home, she showered and got dressed to go meet David and Kristen at their house.

She wore an orange sundress with brown sandals, casual but cute.

David put his hand on the small of her back and lead her to the living room. Kristen went to the kitchen to make drinks for them. After chatting over drinks, they took Lilly on a tour of the house. It was a huge five-bedroom, five-bathroom home with a living room, dining room, family room, game room, office, and a very large basement. Lilly seemed a bit overwhelmed at first but she knew that the job would not be hard being that the house was nearly spotless as it was.

They ended the night on a great note and planned to have Lilly come back the next day to start work.  She was comfortable in their home as they welcomed her and made her feel at home. She left and got some rest that night for her the big day ahead of her.

When she went back the next day, she wore her old housekeeping uniform from her previous job. It was the traditional short black and white ruffle dress with the half apron and bow. She wore black stockings and three-inch heels with her maid’s dress. She was dressed for the job, but anyone seeing Lilly’s banging body in that uniform was bound to be turned on.  Lilly rang the doorbell and Kristen answered. Kristen was wearing a short silk robe and it appeared that she wasn’t wearing anything underneath.

David crossed through the hallway with only a towel wrapped around his waist.

Lilly didn’t let anything bother her. She knew that she was there to do a job and it was completely normal for the homeowners to be comfortable in their own home. They were usually very talkative. As she cleaned the room next to their bedroom she noticed a sound. She listened as she kept cleaning. The noise was one that was familiar. It reminded her of her sneaky sex stories from her previous housekeeping position. It was the squeaking of the bed. She knew they were having sex. The odd part about it was they left their door open. Lilly couldn’t help but to go peek in and have a glimpse of the show.

She was lost in the moment with her eyes closed until she felt her panties sliding to the floor.

It was Kristen, on her knees in front of Lilly taking her panties off. Kristen began licking Lilly’s pussy there in the hallway, as David walked toward them and grabbed them each by their hand and lead them to the bed. David positioned Lilly as he had Kristen before on her knees. He slid his cock inside her as Kristen spread her legs in front of Lilly. Lilly started licking Kristen’s pussy as David fucked her. All Lilly could think about was her previous sneaky sex stories and how none of them ever compared to what she was feeling at that moment.

It’s time to share your dirty secrets with me! If you’re ready for hot phone sex call me now!