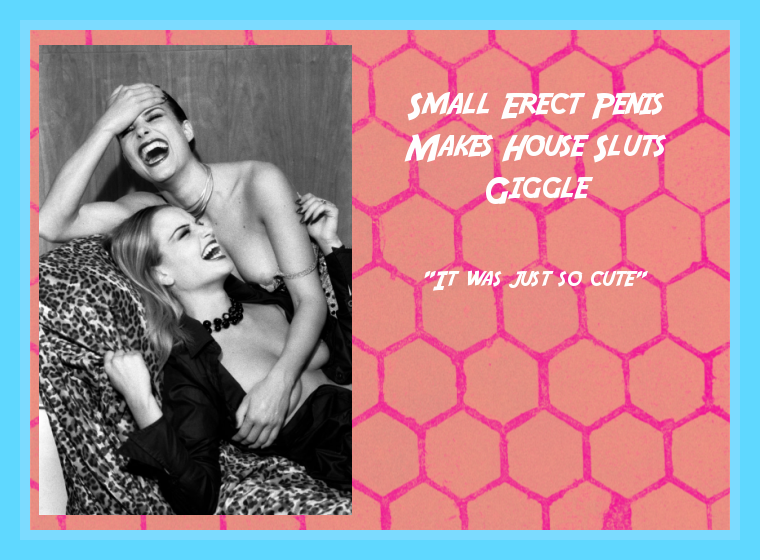 Liam’s small erect penis was the focal point of the girl’s laughter.  It was supposed to be a new adventure for Kaylee and Pam.  Liam had bragged for months about his talent under the sheets, and though Pam was not sold, Kaylee was optimistic.  After all, even if he was not all he said he was, it would be entertaining with her best friend.

Going into the kitchen to grab a drink before meeting him in the living room,  they both were pretty sure what they were walking into.  Another college punk with a big cock and no idea how to use it.  They were thirty now, and most surprises with men were easy to detect.  Guys almost always exaggerate, and of that, Pam was sure.

Walking into the living room, they see his muscular body facing away.  He is looking out of the picture window, and the sun was highlighting his ass and calf muscles.  Pam takes in the sexy scene, wondering if he would take direction well.   Even guys with no play could work magic if they were willing to learn.

Small erect penis?  Your girl will replace you!

Liam turns around with a sexy grin on his face.  Kaylee has a baffled look on her’s, though.  Not the kind that makes you think excitement. No.  It was a disappointment.  Pam started laughing so hard she was crying, and soon so was Kaylee.  God’s gift to women had a small erect penis.  Not average or a little less than average.  This cock is just tiny, like a baby carrot root.

Small penis humiliation was not something Kaylee ever thought she would engage in, but she slipped into the role with Pam on her side very easily.  Frozen in shock, Liam was two minutes from tearing up and running to the door.  That is, he would have if his clothes were not on the chair behind the giggling ladies.

Trying to maneuver slowly past them, not making eye contact, he headed toward his pants.  All too wise, Pam grabbed it out of his hands last minute.  Liam was a hunk, sure, but David was working with more than him!  This is where he learned small penis humiliation was Pam’s forte.

I’ll tell you how minuscule your cock is!

Aiming her camera at the small erect penis, she took a shot and sent it immediately to the cloud.  Panic in his voice, Liam demanded it to be deleted.  Pam, however, informed him that she would not.  As a matter of fact, she was going to do a whole spread of it at the scrapbooking club.  Kaylee started howling with laughter at this idea.

“No one will forget you for generations, Liam.  This club has been going for a long time, and we keep our combined photos for the club’s entertainment.  Did you learn anything, Liam?  Let me spell it out for you.  Don’t brag about what you clearly do not have!”

Now when Liam is in that part of town, he can’t help but notice that girls whisper and giggle when he walks past them.  He knows deep down they have probably seen the photo of his shrimpy small erect penis.  He wonders if they are part of Pam’s club or if it has gone viral.

Call me if you dare to try SPH Phone Sex