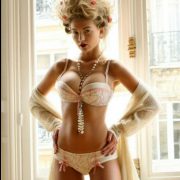 I was living in Paris at the time and wanted to get out of the city for the summer. I’d read that this castle/hotel in the Loire Valley was hiring girls.  It didn’t take me too long to pack up my things and hop into the TGV.

The castle itself, le Château de Lafère, had the reputation of being the Number One touristic attraction of the region. The reason was simple. The owner, le Comte de Lafère happened to be a descendant of the French aristocracy of the late 1700s.

Le Comte had decided to adopt a French Revolution theme for his castle. So he’d turned it into a mini replica of Versailles with lavish furnishings, tapestries, velvet curtains, etc. Even a magnificent Steinway piano was perched at one end of the salon. The castle even had a ballroom. And sort of morbidly, the wine cellar had a small replica of the ghastly guillotine.

The owner’s idea was ingenious and attracted handfuls of international tourists. One had to make reservations months ahead of time to book a suite in le château. In fact, it was crawling with North Americans and Europeans year round, most of which were male.

This meant that most girls would be wearing sexy, provocative and modernized Marie Antoinette costumes, while the male staff would walk around dressed as Louis the XVI.

Management handed a costume to me on the second day of my arrival. I liked it right away. It was comprised of white lacy stockings, a garter belt, a corset that barely restrained my large perky tits and a frilly poofy blue dress that scarcely covered my behind. Any sort of movement would show off the lacy culotte that contoured my ass cheeks. To complete the look, I had to wear a pair of sexy white heels.  Even if they weren’t very practical.

I also had to pin up my blonde curls as high as possible. Let’s not forget the pale make-up, rosy cheeks, fluttering eyelashes and pouty lips.

I’d spend my days prancing around in that scandalous costume flirting with the guests. I’d fan myself with a golden trimmed éventail and put on superior Marie Antoinette airs. At teatime, I’d often tell men to go “eat cake” and it would never fail to amuse them.

Of course, it didn’t take me very long to pick up on the fact that there was a lot more going on at le château…

None of the girls actually had real work duties. We were pretty much hired to wear late 18th century costumes with a sexy twist. So it didn’t come as a shock when one day, le Comte told us to be in the ballroom at midnight sharp.