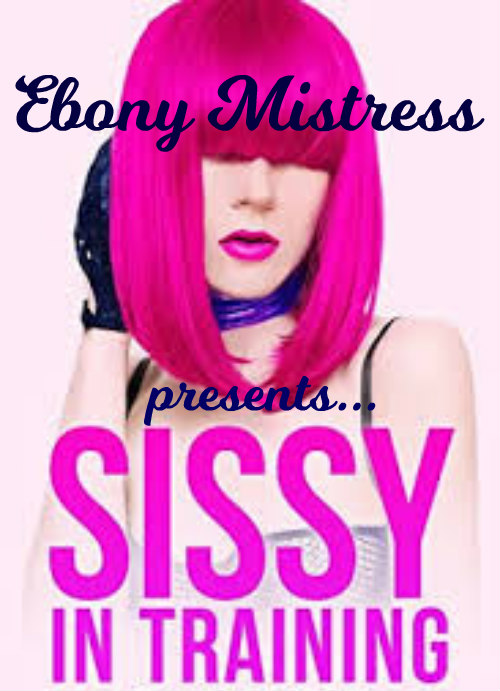 He jumped up, startled and fumbling for the remote. He was trying to eliminate the big black cock that was now exploding into the little white sissy boy’s mouth from the screen. However, it was too late. I had him on camera and just where I fucking wanted him. The wheel began to churn in my head as he begged and pleaded for me not to tell Tiffany. “She will never understand!” he said between pleas. I could help but snicker as I listened to his pathetic appeals. I knew at that point what I would do with him, sissy training.

It’s time to get this little BBC cuckold want-to-be introduced to his new Ebony Mistress before his wife calls my cell phone. “Shut the fuck up!” I commanded. His eyes widened as his mouth remained open without words. I cut off the camera and tucked it in my purse. Feeling empowered, I walked over to him as he cowed on the bed in his pink sissy panties. “Sissy training starts right now!” I clarified. He started to speak again. Therefore, I placed my finger over his lips and told him to hush. Grabbing my phone from my purse I then emailed the file to myself. I began to describe the sticky situation he has found himself in. The look of defeat on his face showed me that he accepted and he replied with, “Yes Mistress”.

Just then my phone rang, it was Tiffany. He looked panicked, but I assured him that if he was a good little sissy slut for his Ebony Mistress, I would keep his secret forever. Upon him agreeing I answered the phone and advised her that her husband was safe and sound. I lied and told her that he was in the garage working on the truck and had left his phone in the house. Putting the phone on speaker, I allowed him to tell his wife he would call her a little later. I hung up with her and turned my attention back to him. “So you want Big Black Cock?” I interrogated him giving him full eye contact. Still unable to form the words he just shook his head yes.

Time to make another call!