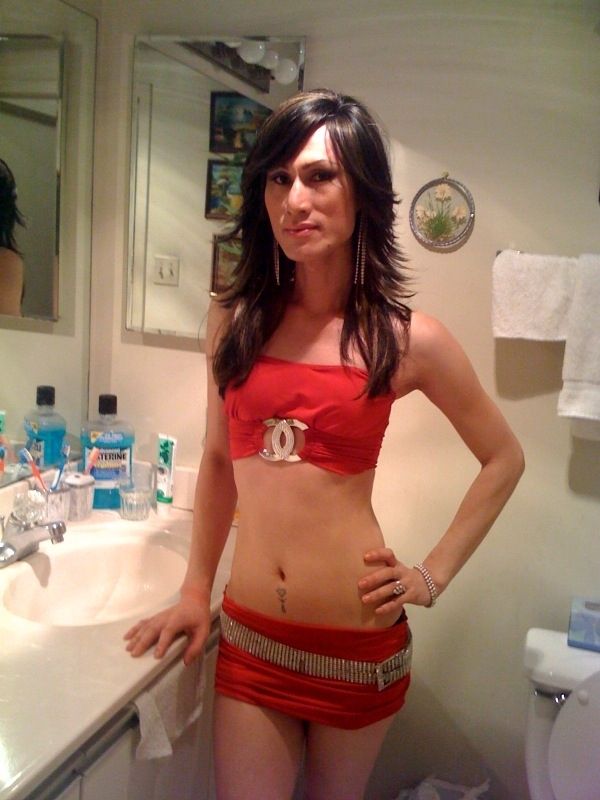 I love pushing people out of their comfort zones and getting them to do something they were afraid of trying. I’ve been playing with a certain sissy, Sophie, for a while now but always at her place. She’s never been outside as her alter ego because she wasn’t confident enough and was worried about the reaction she’d get from other people. I say screw other people; let them stare and whisper. It was time for us to take Sophie out in public shopping.

I went over to Sophie’s and told her that I was going to get all dressed up so we could play. I skipped the part about us going out; she’d find out soon enough. We went to her room and she got undressed. She stood there in her boxers while I rifled through her dresser. I found a cute pink bra and pantie set and handed them to her. She took her boxers off and put them on. She already had a small bulge in the front of her panties. I opened her closet, pushed past the male clothing and pulled out a short red dress.

She slipped it on and I told her to find a pair of shoes that would match. She picked out a pair of black heels. I sat her down at her vanity table and had her face me. I took my time going through her makeup bag and criticized everything she had. Finally, I sighed and threw the bag down. I told her she had nothing good and we would have to go shopping. She looked scared but I ignored it and told her to put some makeup on. I handed her a brown wig and stood over her as she went to work. She did her best but she’d never be able to pass as a woman. I told her there was a beauty store at the mall that we were going to. Sophie tried to talk me out of it but I stood firm.

When we got to the mall I dragged her out of the car and through the doors. She kept her head down and I reminded her to stand up straight. She did and I took her to the beauty store. I noticed a few looks on the way but nothing major. People don’t notice anything unless it’s right in front of them. We got to the store and I told Sophie to ask one of the sales associates to help her find the right makeup for her skin tone. I pretended to browse while keeping an eye on her.

She asked a sales associate to help her find the right make up. The girl’s face froze then she started acting helpful. I guess a nice commission is worth acting professional. She sat Sophie down at one of the counters and showed her different makeup products. She tried a few of them on Sophie, giving her a little makeover. I picked up a lip gloss from the counter and walked past. I stopped when I got to Sophie and complimented her on how nice she looked. Then I said it was so sweet of the sales woman to help her be a real woman then went to the checkout.

I sat on a bench outside of the store and watched Sophie pay for her purchase.The cashier did a double take and kept sneaking looks at her while she rang up the items. Sophie blushed and quickly left.
I put my arm around her and asked if she had fun. Sophie nodded and said it had been a thrill.

Good because the next store we were going to was the sexy lingerie shop….