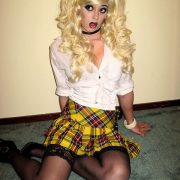 Ready to be my sissy panty slave

As a little girl, I always loved to play dress up and I still love it. Today it’s not so much me getting dolled up instead it’s a sissy panty slave. I remember using my brother as a little doll. I’d put him panties, pantyhose, a dress, and heels. There were a few times I went all out and even put some makeup on him. To you, it may seem to mean but my brother loved wearing my panties. Oh, don’t act like a pair of sexy panties don’t turn you on. If your reading this then your probably already wearing them or will be before you finish. Now that we are older and I and my brother live so far apart I had to get a new sissy panty slave. I have taken in several sissy boys over the years but I get to go further than dressing up.

Now that I’m older my imagination has wandered far away from dressing up. I’ve gotten more into the dressing up and pimping out phase. It started when  I caught an old boyfriend wearing my panties. At first, it was awkward but all he wanted to do was wear my panties while sniffing a dirty pair. I would sit and watch him jerk off in my panties which were actually hot. After that relationship ended I dated another guy who desperately wanted to fuck me in the ass. I saw his desperation as an opportunity to explore my sexual horizons. We made a deal that if he’d let me dress him up like a girl and fuck his ass with a strap on then I’d let him have my ass. He let me dress him like a school girl.

From boyfriend to Girlfriend

Keep in mind he also had a girlie voice and his cock really wasn’t all that big. Maybe 5 or 6 inches and if you know me well then that’s okay but I prefer them BIG. The only reason I stuck around was that he could eat pussy better than any man in my past. As we went to my lingerie drawer I pulled out a pair of white satin panties, school girl skirt, shirt, and stockings. After dressing him up I put my Goldilocks wig on him with some Black heels. He was also wearing makeup, eyeshadow, blush, lipstick, the works. I thought he looked hot, or should I say she. Little did he know he would be the first sissy panty slave. I took some pictures and as he modeled for the camera but I lied when I said no one would ever see them.

He bends over the bed sticking his little sissy ass out then I pull the panties to the side and lube his asshole. My finger slipped into his ass followed by two fingers in his ass. I had to stretch his virgin ass enough to get my strap on inside. My fingers weren’t enough and he was whining like a baby. I grabbed a butt plug and shoved it inside him. That should stretch his ass out. I grabbed my strap on and shoved it in his mouth to shut him up. When he finally got adjusted to the butt plug he got into the idea of sucking my strap on. I’ll admit he was pretty good at sucking a dick, maybe because he’s really a fag. When I got bored moved his panties aside, removed the butt plugged and replaced it with my strap on.

I got maybe 2 inches in before he started freaking out but I just reminded him I was next. I’m telling him how good I feel, and how tight my ass is which helped him relax enough for me to get all the way inside him. I pumped it inside him slowly but the more he got into it the rougher we got. He didn’t last long before creaming his panties. After the fucking, I gave him he came to collect his reward but I lied. Did you really think I was going to let that sissy panty slave fuck my ass? Hell NO! What’s your fetish phone sex fantasy?