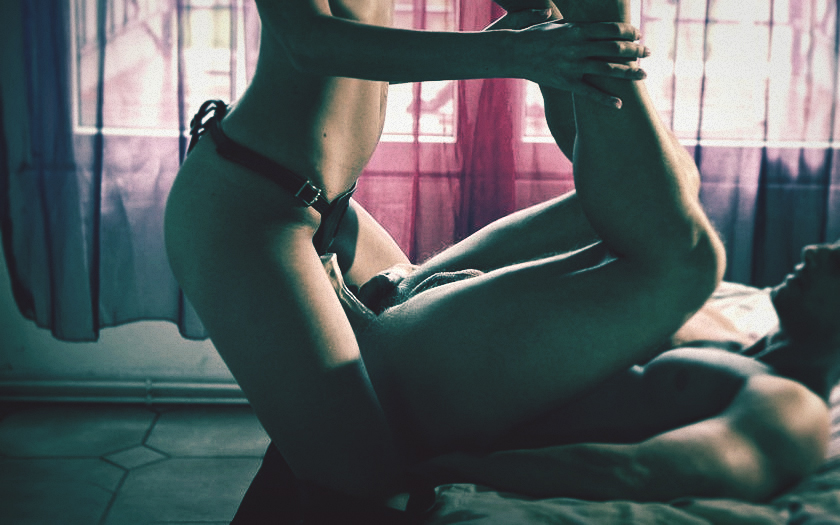 I have this neighbor who is a real asshole. I have been dying to put him in his place. I walk by and he makes nasty comments at me and is always parking behind me blocking in my car. I have pretty much had enough of his bullshit. I have done my best to ask him nicely so please stop and try and be a better neighbor, but no luck.

I just walked over to this house the other day. I was not going to play his stupid games anymore. He opened the door, he had on a white tank, baggy jeans, and a beer in his hand. I smiled at him and invited him over to my house. Of course he accepted my offer. I led him into my bedroom and played it off like he was going to get to fuck me.

But he was very wrong. I was going to be the one who is doing the fucking. I went into my walk in closet, shut the door, and put on a tight black corset with some tall black boots. When I walked out I could see his dick growing hard in his pants. I let out a small laugh and told him to lay face down on the bed.

He was pretty reluctant but I was able to finally convince him. I promised him that if he did whatever I said then I will let him do whatever he wants to me, of course that was a lie. I was telling him anything to get him to cooperate. After he was laying face down on the bed, I pulled out some straps and tied him to the bed frame. He started to struggle and told me to let him go. He said that it was now getting too weird.

I grabbed a pair of scissors from the door and started to cut off all of this clothes, exposing his bare white ass. He started to scream and call me a little bitch and that if I did not let him go I would be sorry. I smiled and told him that he is going to be the sorry one. Then I smacked his ass hard with a whip that I pulled out from under the bed. I told him that he is going to be a good boy from now on. Then I gave him another hard smack. I told him that he is now my little fuck toy, and that he WILL do everything I tell him to do. Instead of smacking him this time I turned the whip around and shoved it in his ass.

To my surprise he let out a moan, not a scream, or begged me to stop. “Oh, I have a little sissy boy on my hands. You like getting fucked in the ass don’t you?” I said as I shoved the whip handle in even deeper. “YES!” He screams. “Well then you are going to love this!” I said as I began to untie him so I can flip him around.

Want to know what happened next? Sissy Phone Sex is what you want!