Sissy Phone Sex, He sucks Cock Like a Champ* 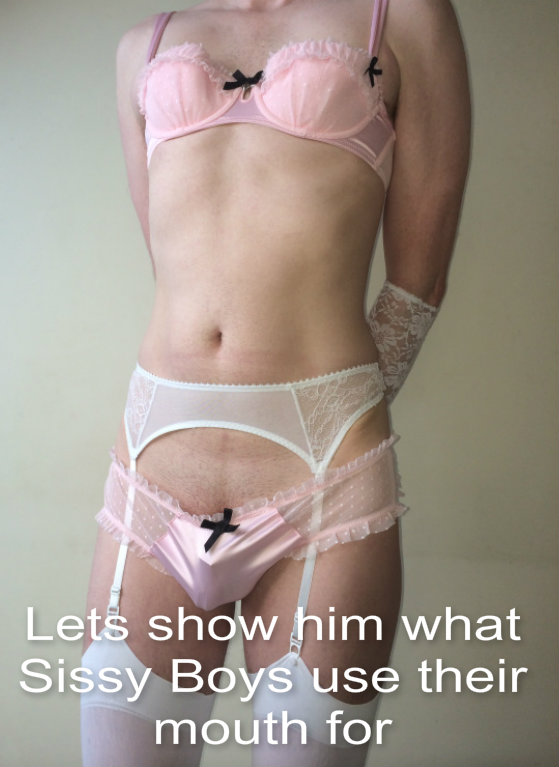 Sissy Phone Sex! I love it!

You should have seen this guy Daniel last night, he was sucking dick nearly as good as I do. The only thing that made it even better was the naughty little sissy outfit he was wearing and that I made him do it.

Daniel was hanging out at my place and showing off his new bra and panties that he’d bought. They were black, lacy and skimpy; they’d look so cute and girly on him. He’s only ever been Danielle in front of me but I thought it was time he showed his true self to somebody else so I sent Adam a quick text. I told him to come over because I had a sissy that would love to suck him off. The dirty fucker replied back a minute later saying he’d be at my house 20 minutes.

I quickly broke the news to Daniel and told him to turn himself into Danielle because he going to show off and suck Adam’s cock! He tried to talk me out of it but I wasn’t changing my mind. I had to practically undress him then stood over him over as he put on his bra and panties. He did it slowly, probably hoping I’d tell him it was all just a joke but he was out of luck. The bra was flat on him and I filled it out with some tissues. His panties needed no help, they had a nice little bulge in the front already.

Aw, my little sissy is such a whore for humiliation.

He was biting his lip nervously and I grabbed a tube of red lipstick to finish his look. I spread it over his lips as I told him how pretty he looked and what I wanted him to do and when the doorbell rang I sent him to go answer it.

He came back into the room with Adam and I sat at my desk so I could get a great view of my two boys. Adam fussed over Danielle, telling me how hot she looked and that he couldn’t wait for Danielle’s pretty full red lips to be wrapped around his cock. Danielle took her clothes off and pushed Adam down on the bed then said in her sweet, sexy voice “Mmm, I can’t wait to taste you.” She gave a quick look at me and I nodded at her to continue. She got on the bed and knelt between his legs.

She slid Adam’s dick out of her mouth and stared at the floor with shame.

I went over to her and held her chin up, forcing her to look at me. Her red lipstick was smeared all over her mouth and shiny wetness was on her chin. “A part of you liked that, didn’t you? More than liked it, you fucking loved it!” She blushed as she nodded. I grabbed a tissue out of her bra and wiped her face clean. “Good, if you liked that then you’ll probably love what I’m going to make you do next.”