Showing My Friend My Sex Toys.. 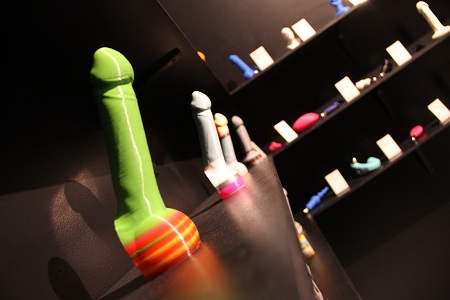 I’ve always been pretty adventurous when it came to sex.. ever since I was younger. I blame being a city girl and having access to a personal laptop when I wasn’t even out of elementary school yet. It made it really easy to Google things I shouldn’t. 😉 And soon enough, I was crazy, naughty, and open to almost anything. The first time I ever went into an actual sex shop, though, was a random lunchtime adventure. I thought we were going to Taco Bell..and my friends decided to take us to a sex shop downtown. And I looked through all of it making silly faces pretending I was shocked, or surprised at the things there.. but I wasn’t. I had a few of them! Though I’d been sneaky about it and bought them online..

It only seemed fitting that a few years later, after college, I let one of those same girls – Casey, the ‘party girl’ blonde of the group – crash at my house for a few weeks. She’d had some issues with her boyfriend. I figured she wouldn’t mind if she did overhear some of my ‘work’ calls since she was just as wild – or so I thought! One day after I got home from a nice drive, she was sitting on the couch, looking through her phone. The second I walked in, she asked if she could ask me something kind of personal.. and I started thinking of anything I might have done wrong – did I leave something questionable out? Did she go through my computer? Nope! She’d just gone into my room for a second and seen my little clit vibrator on the table.. And she had a million questions. Did it feel good, was it too powerful, how much did it cost.. She asked me so much, I wasn’t really sure how to answer it all. So I did the next best thing. If she was so curious about my sex toys..I’d show her all of them! With a little giggle, I ran off to my room, having her follow. And I unlocked a little black safe from one of the drawers.. And she really got a good look of all the sex toys I’d accumulated over the years. Definitely not a ‘grand collection’..but it was a nicely sized one! And one I needed to do some explaining about..because I’m a masochist, so there were some clamps and things in there she wouldn’t even consider.

However.. I thought I’d be clearing up her questions, and I only caused more. The only way I could really show her how much fun she could have..was to show her how to use them. She was a little slow to accept, so I flirted a little, whispering little things.. like how much better I could make it feel that the douche boyfriend she’d recently left. And, as soon as I threw that in, she was game. She was quick to get over her exes anyway, usually by experimenting with someone new..So it was a perfect match 😉

I pulled her into bed with me..rolling in the sheets, spending every second leaving soft kisses on her skin.. Piece by piece, my jeans, shirt, and lingerie scattered around the room. Her little yoga shorts were the last to go…and as soon as they were off, I worked my way down slowly, easing her into it. I’d played with other girls in college before, and she had too – we were always the ones going on about some drunk adventure we got into. But this was the first time we’d actually played with each other..