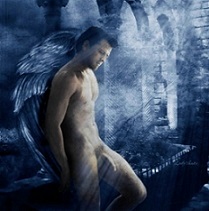 He turned to look at me so that I could see his face a mask and unreadable. “We’re not supposed to talk about it.”

This was not happening.

I sighed, but my laugh just wouldn’t die. “Would you like to see how it actually feels?”

I kept kissing him as my hands slid down to his pants. Unzipping him, I grabbed his hard cock in my hands and stroked him. His eyes rolled into the back of his head as though it were the greatest feeling he’s ever felt.

I moved my panties to the side and slid my soaked pussy down onto him. Oh, the fun I would have with this angel. I wanted to teach him everything I knew and it started with this moment. I rode him as though it would be my last fuck. We both came so hard as his wings opened up and I saw a brief flare of white light.

If you want to have some hot phone sex with me then give me a call!