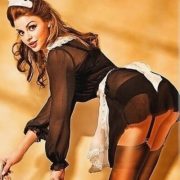 So, did you ever have fantasies of fucking a sexy young maid?

There have been many times my own husband has begged me to dress up as the young sexy maid or a hot schoolgirl in pigtails to have that very fantasy played out in our bedroom.  You have to admit, there is something kind of hot about the idea.  What do you think?

Mary was the opposite of what I had expected.  She had this rebellious look in her eyes.  I’ll never forget when I heard other staff gossip about how she came dressed for her interview.  Mary was very young, had smooth skin, long sexy legs, and a sexy way about her.  I’ll save the other details for what happens next.  I believe my mother was against hiring her, but my dad didn’t want it any other way.

To begin with where had Mary come from?

Mary never seemed to follow the rules.  First of all, she would come to work wearing her very shortest of skirts.  I’m quite certain Mary did this to bother my daddy.  I would look over at mom and see her jealous expression when my daddy’s eyes would linger to her ass as she bent over to clean.  His legs would shift under the table as if he were trying to readjust himself.  I could imagine his hard cock bulging under his pants.

All in all, she did a pretty good job.  She wasn’t the best asset to the home.  I think my father hired her so he could fuck her.  He definitely delivered on that action.  Let me tell you what happened one day when I came home early from school.

Well, school let out early due to some bad weather.  I will never forget I was rather wet due to walking home.  My shoes were muddy, my clothes clung to my young body.  Shivering I headed to my room to change.  My ears perked up?  I thought I heard muffled laughter behind my dad’s door down the hallway.

Next, I went to change into my shorts, and half shirt.  I was thinking of just going to the gym we had in our home, but the noise occurred again.  After a brief pause, my hesitation turned to resolve as I went down the long hallway.  As I walked, I could hear laughter and loud moaning.  It certainly did not sound like my mother’s cries of passion.

If it wasn’t my mom behind that door, then who was making those sounds?

I had this sinking feeling in the pit of my stomach as I reached my parents’ bedroom door.  The door was not closed all the way, so I quietly opened it.  From my view I could see the sexy young maid down between my father’s legs.  Her clothes were thrown on the floor beside the bed.  Her head bobbed up and down on his big cock.  Dad threw his head back as he grabbed her hair.  I can’t believe that slut was there to give my dad a good time?

Finally,  she got up on top of him and started to guide his big fat cock into her pussy.  I could see her round ass from behind.  There was no denying Mary was pretty hot.  She rode that cock like she was in the race of her life.  He pumped her and grabbed her hips.  The sound of her tits slapping her chest was very apparent.

Would you like to hear more about sexy young maid Mary and what took place next?  Call me for the hottest phone sex fantasy fun.