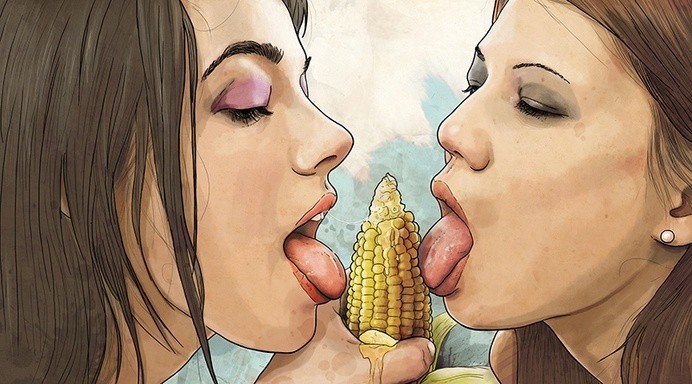 We got naked and had so much fun doing that, there were hands everywhere as clothes dropped to the floor.

Both of us got on the bed and Jeff laid down on his back while Katie and I kissed each other above him. He touched both of us and I teased him by rubbing my fingers over his chest and asking Katie where we should start. We knew damn well where he wanted us, his dick was rock hard and throbbing in the air already.

I trailed my fingers down as I said in a playful voice “I think we should start here.” I looked at Jeff as I lightly rubbed his head and asked if I was right. He smiled and nodded as I leaned down, my hair brushing over him as I wrapped my hand around his dick.

Putting my mouth over his tip I sucked on it as I rubbed my thumb over his slit.

I let him go and sucked him with long slow sucks, pushing away my gag reflex as he hit the back of my throat. Katie popped a ball on his mouth and sucked on it as she fondled his balls as I kept going. He put his hand on the back of my head and pushed me down, choking me on his dick. Pressing my lips tightly around it as I sucked him harder I could hear him moaning loudly.