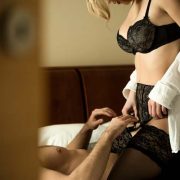 Rather than Fight About It, Wife Decides to Do Some Sexy Public Humiliation!

Wow, I never thought my friend, Heather, would set up a sexy public humiliation for her husband. To be honest, I think he had it coming for quite some time.

We always felt that she had deserved better even earlier on in their dating relationship.  He was always looking at other girls, if anyone was wearing a short skirt, he would pretend to drop something and try to take a peek underneath the table. He would sneak down and try to see if the girl was wearing no panties.

Finally, it came to a head one day when she came home and found him and another woman in their bed. Heather had returned home early from a business trip. When she walked into the house she heard laughing and groaning. Slowly, Heather went up the stairs. The bedroom door was wide open. There on the bed was her husband Jack and a girl she didn’t even recognize. This girl was riding his hard dick hard. She had a big round ass and big fake tits. Heather was seething, so angry inside, so hurt. How could she have been so ignorant? It’s not like she was boring in bed. She even offered to bring another woman or man into their lives to have some spicy fun.

She was determined to get even!

Finally, after leaving the house for a while, Heather decided to return home. She told her wimpy husband she forgave him. She then suggested they should go out on a dinner date to a place of her choosing. Eager to get back into his wife’s good graces, he agreed. Heather even dressed up for her date putting on her slinky red strapless dress, thigh-high black silk stockings, and her stiletto heels.

Normally, Heather would have picked a boring upscale restaurant. However, tonight she picked a questionable dimly lit bar. I believe if Jack had been paying attention, he would have noticed where they were, but he wanted to appease his wife.

Guys started coming up to the table and eyeing Heather’s husband. She made sure to sit across from him so that she could see his eyes. One man was most persistent in wanting his phone number. Jack grew quite uneasy which is what Heather was hoping would happen.

What a ride it was for Heather to tell him how to suck big black dicks. If he didn’t do what she wanted, she threatened to leave him immediately and drain his huge bank account for everything he had. Not wanting to lose everything, he took the first cock into his mouth and started to gag. Next, she instructed him how to put his lips around the big black dick.

There is still more of this sexy public humiliation story to share with you. I’d love to share all the details with you or perhaps you have your own humiliation phone sex fantasies?  Call me and let’s talk.