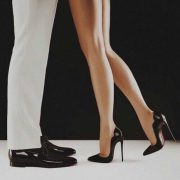 A sexy office affair was not something I ever expected to get. When I was nineteen, I worked a small, part-time job at a legal firm downtown. I wasn’t a paralegal or anything, and I definitely did not study to become one or even pursue anything in that field. However, it was a little secretary job that was easy enough to do on my time off from school. I had my boss and all his friends wrapped around my finger, because I have always been a cock tease. Life has always been easy because of it, too. Who could ever be mean to me when I can just puppy-pout my way out of it?

I did this plenty of times at the office, as well. Sometimes I’d screw something small up and have to go rush off to make it right, but a puppy pout would save my ass in the end. However, after I used this approach several times, the magic started to wear out. My boss, Mr. Leone, grew immune of all my little tricks and started to see right through my flirting. I’m not sure if it really counts as ‘seeing through’ it, because really he just fell further into my spell.

I had him wrapped around my finger.

I was in deep shit. He cracked the whip and everyone in the office ran to get whatever he wanted. So when he turned his attention to me, I was caught in his trap with no way out. One day, he called me into the office and had me lock the door, and close the blinds. At the worst, I thought it was going to be something simple, yet bad. I thought he was going to fire me, which was the least of my worries as a little nineteen-year old right out of high school. I thought, “oh, big deal, I’ll get another job right after.”

But his intentions were definitely not to fire me. Instead, the first thing he did was walk around the desk and lean back up against it. His waist was right at eye level, and he was staring me down with a small smirk on his face. All at once, every dirty fantasy of a sexy office affair went rushing through my mind. I’d always been the one teasing him.. And he stood right in front of me, with his cock just a foot or so away from my face. It was safe to say – I wanted him. I had tormented him this entire time. But now, I wanted him to take me, right then and there.

It was a wild turn of events.

I think he could see it in the way I was looking up at him. My usual careless demeanor changed quickly. He took his belt off and I bit my lip as I looked up at him, completely unsure of myself for the first time. Once I was a mess, he took the belt down to my neck, carefully running it around it and fastening it. I did panic for a second or two, but his finger tilted my chin up gently as he stared right into my eyes. “Don’t. You’re mine now, Kali. Always such a tease – always such a brat. Your game’s over now, and you’re going to do whatever the fuck I tell you to..”

Can you imagine..? He made me wet instantly. It was every fetish phone sex fantasy I’d ever had, all at once. I always craved something like that, and he made it come to life.