Sex Stories Office Style – London Does Anything For a Raise!* 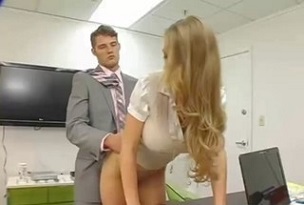 Sex stories are fun, but if they take place in the office, well, it just makes it that much hotter.

I wanted to have a serious adult chat with my boss. This was about a raise. It had been a long time since I’d gotten one and I thought it was way overdue. He was a stern man so I knew it would take a little extra to persuade him.

That day I dressed in a tight pencil skirt, stockings, peep-toe pumps, and a tight blouse with the top two unbuttoned. When I entered his office he was still on the phone so I took a seat in front of him and waited patiently. I crossed my legs and shook my foot nice and slow. I twirled my hair and smiled at him.

As the conversation progressed he looked more and more agitated. Got him!

Now it was time to make my move.

“What the hell do you want London?” He scowled.

“I was thinking,” I said as I stood up and walked behind him, rubbing his shoulders, “it was about time I got a raise.”

His scowl deepened. “Just why the fuck would I give you a raise? This really isn’t the time!”

Gripping his chair, I spun it and him around to face me. Sinking to my knees I reached for his belt. “Oh, I’m willing to work for it.”

I could see the gears whirling in his head, but he didn’t try to stop me. In fact, I could see just how hard his cock was getting for me.

“Did you lock the door?” He demanded.

I nodded as I took the entire length of his half hard cock into my expert mouth. His head tilted backward and his eyes half closed. No doubt I was going to get my raise, especially after I let him fuck me.

That’s exactly what I did, too. I bent my tight ass over his desk and let him pump in and out of me as hard and fast as he wanted.

If you’re in the mood for some hot phone sex office style then give me a call because I have what you want!