SEX OFFENDER REGISTRY. OKAY, SO, I’M ON IT!

SEX OFFENDER REGISTRY. OKAY, SO, I’M ON IT!

I admit it. I’m on the National Sex Offender Registry. I suppose my attraction to the opposite sex began in my teens, where I discovered the allure of ‘the older man’.  I know, I know…now, I knew better, yet, I still stepped into the trap!

Working as a waitress through college was both a Blessing and a Curse.  Or, maybe I could blame it all on the itsy-bitsy, teeny-weenie uniform.  Whatever the case, I became addicted to the way the older men looked at me.  The way I could actually feel it radiating through my clothes to my skin.

There is a particular gent who always sits in my station and he’ll wait until a spot opens up for me.  Mr. Honey-Bunny is a real sweetheart.  He lifts my spirits, makes me laugh and he FUCKS THE SHIT OUT OF ME!  He’s ready when I’m ready, which is pretty much all the time.  What a Blessing to have such a hot, sexy playmate?

The Sex Offender Registry and how I got on there.

So, this older man caught my eye.  You know, white hair in just the right spots, brilliant smile, smart-guy looking glasses and a brain to go with it.  He gave me a smile that had me creaming in my uniform bottoms and we were off to the races…or, so I thought!

We lived happily together until his sex drive slowed down.  I never realized how reticent he was to my wildness.  Once he even called me a nymphomaniac!  The nerve!  Is it my fault that the men I love, can’t keep up?  So, I did what any red-blooded young woman would do; I found lovers.  Okay, I call them lovers, but the judicial system calls them victims.  What pussies!  I mean most men might consider and half-naked woman already inside their car in a dark parking lot as sexy.

Well, not the men I like.  Furthermore, I’m pretty sure you already guessed they also aren’t huge fans of the minor pick-me-ups I slip them.  What’s that called again?  Oh, yeah a Micky. Haha. What I call party favors, they call criminal behavior! What?  Likewise, now I have to be on a list of neighborhood predators.  I’m not chasing kids around.  It’s the grandpas in the neighborhood who might want to watch out for a sexy hot young woman.

I attend the stupid classes geared at breaking my fixation.  I’ve pledged to stay away from the men I’ve assaulted. And I have sworn off drugging them (eye roll inserted here. LOL).  So, what more can I do?  They still want to brand me as a deviant.

They put me on that crazy Sex Offender Registry…AGAIN!

Well, now I’m not allowed near the old folk’s homes, or any senior centers…generally NOWHERE hot, older men would be found.  From now on, I PROMISE to not rape or, mesmerize my favorite age group.  Maybe now, I’ll scale back and focus on men between 50 and 60.  Maybe they can handle my brand of naughty better.  I’ve done so much already.  And to think I started by Getting College Girls Naked! I consider old men a BIG step up.  Don’t you?  This is progress people!

So, while you WON’T get a Free Phone Sex Trial with me, believe it, I’m worth every penny you’ll spend on me.  I’m the ride you’ve been too afraid to take. Now, let’s STOP THAT! LOL. 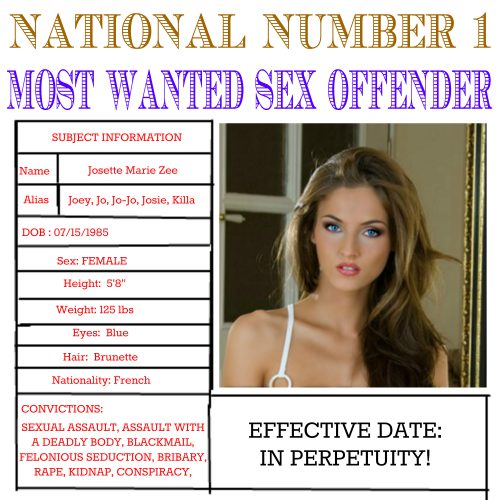