Sex Doll Surgery Mistakenly Given To A Clueless Husband ♕ 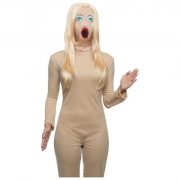 Sex Doll surgery isn’t uncommon.  In fact, Bimbofication is one of the most popular cosmetic options doctor Stines and I perform.  But this was an interesting case.  See, the patient in question asked for the works — tits, ass, dick-sucking lips, you name it.  So, why is a dude lying on the table in front of us, naked and unconscious?  Seriously, the chart says female.

Dr. Stine’s began to suit up.  “I’m not paid to ask questions.”  That was something he said often.  I guess that’s why we’re working out of Mexico.

One by one, I hand the good doctor whatever he needs.  He makes me a tad…unscrupulous, but his work is top-notch.  When someone orders the works, that’s exactly what he gives.  I could barely keep hold of the massive fake tits in my arms.  They were even bigger than mine!  I couldn’t believe he was able to pack in those triple L cup tits but, by God, he succeeded.  There wasn’t a blouse on earth that would be able to hide those bad boys.  A little liposuction here, a little collagen there.  The ass implants were extremely impressive.  They looked like two basketballs.  Stines always said an ass isn’t an ass unless you could balance a glass of water on it.  I tend to agree.  I have to say, Stines was having a blast, but the main event was upon us.

That cock just had to go.

It honestly wasn’t doing its owner any good by existing.  It was small, pathetic, and served only to inspire fits of uncontrollable laughter between the doc and me.  Not gonna lie; we took pictures.  We couldn’t help it.  One was of my tongue almost touching the tip of it.  Even though the guy was unconscious, it’s like the cock knew!  It got hard, but, unfortunately for it, my tongue was four inches away.

Poor thing couldn’t reach.  It did manage a piddly little squirt, though.  Good for him.  It’ll be a nice last hoorah before nipping it.  We took another with it next to Dr. Stine’s real cock as a comparison.  1/3 the size at LEAST.  We were doing this poor guy a favor by giving him a pussy instead.  All he was doing was disappointing ladies.  When he woke up and saw the picture, he’d realize we had his best interests at heart.

Well, it was a long journey, but it was probably Dr. Stines’s finest work yet.  One of the hottest bimbos I’d ever seen once he was all healed up.  I couldn’t help myself.  I had to run home and grab some clothes. One of my shortest cocktail dresses and some 7-inch pumps, my make-up kit, I just had to see what this guy looked like done up like the whore he was destined to become.

My pussy turned into a fucking waterfall when I saw that beautiful body laying on the table next to nothing.  I wanted to jump on that table and rub that brand new pink pussy against mine until my squirt drenched it.  In fact, I did.  I scissored that skank’s shiny new pussy until I had cum three times.  I didn’t feel bad, either because  I know for a fact Dr. Stines had a go.  I came in the following morning him throat-fucking those DSL’s like no tomorrow.  He said he was sampling his work.  Kind of like chefs do.  We agreed that that would be our little secret.

We had fucked this unconscious bang-slut so much; we completely forgot that it was a person and had to go home.  Our fun was interrupted by a young wife, anxious to see her new and improved husband.  One look at her old husband and she was instantly pleased.  It was time to wake him up.

“Out of curiosity,” I began to ask, “how did you convince him to do this?”

The doc and I looked at each other.  This is going to be one hell of a wake-up call for him

How would you react if you woke up as a bimbo sex doll?  Call my phone sex line and confess.  We’re all friends here. 😉