THE SEX CRAZED MANITOU AND THE WHORE FROM TOWN. 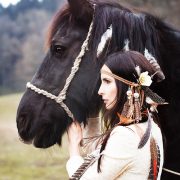 The Sex Crazed Manitou And The Whore From Town.

The creed, or doctrine for these belief systems held that intelligent spirits inhabited all natural objects and every object is controlled by its own independent spirit. Spirits inhabit the sky, stars, sun, moon, rivers, lakes, mountains, forests, the animals, insects, fish, stones, flowers and birds. Some spirits are good and help men who please them whereas other spirits are bad and liable to wreak havoc on people and entire tribes.

The possession of by the Misho-tunga on Illanipi, son of the tribes Trusted elder, Qunah, came about during a pipe smoking ceremony gone wrong.

It was performed by the unBlessed son of the Nat-so-gant, or Medicine Man. They were really just playing at the ceremony, not realizing that some things are not to be played with. The manitou crept in while Illanipi slept off the mushroom high from the night’s revelry. He awoke with the stiffest dick he’d ever experienced and a single-minded urge to fuck anyone and everyone in his wake.

He first set eyes on Yoomee, his 14 year old second wife. She lay on the floor-mat, with limbs strewn over, Sipatu, his elder wife at 27 years of age. The two often slept together during Illanipi’s hunting expeditions. And by slept together, I mean slept…together. Neither was particularly drawn to the same sex. But, they needed to meet their needs in Illanipi’s absences. There’s was a very loving, if forced, bisexual relationship.  The prior moon, the two had been washing robes downstream and had decided to remove the ones they wore to clean them as well.

Elder wife, Sipatu couldn’t help but  stare at the nubile, perfect tits of her younger, sister-wife.

Yoomee had been Blessed with a phenomenal body and teardrop shaped tits with very large nipples. Sipatu licked her lips under the setting sun and reached out to touch Yoomee. Realizing Yoomee wasn’t pulling back, she lowered her lips and began to suckle at one nipple. Sipatu was overwhelmed by a desire to lap at the younger girls juices and they hurried back to their teepee to make love.

Illanipi was…possessed by the manitou of a sex crazed demon.

He was ravenous for MORE. And these two would provide it, or he would get it elsewhere! His wives were nothing if not obedient to their husband. They relented to his brutal advances. Sipatu would later cry about the corners of her mouth having been split wide by his assualt.  The young, Yoomee suffered from other “splitting” injuries to her pussy and ass. Illanipi stood over 6’5″standing with feet bared to the ground and boasted of a 16″ cock, thick and brown. Some called him Big Black Cock behind his back. Giggle

Illanipi had to be restrained to keep him from impregnating all of the tribeswomen.

He had in a fortnight impregnated not one, but BOTH of his wives! The women lived in fear and delight at his midnight marauding.  Chief Papaw had warriors standing guard at Illanipi’s teepee to prevent his exit, should he get loose. But, his own women were offered no protection. They were, in essence, the stop-gap between him and the rest of the tribe. It had been proven already that he would as easily plow the ass of a fellow warrior as his own wives. The demon had no sexual preferences.

Inside the teepee, Illanipi and his wives spent five fortnights together. By the time they came out, both women were close to “showing” with pregnancy and Illanipi had lost much of his weight and musculature. The demon was not ousted and lives to this day within him. There are tales, even now, of his late night “hunts” throughout the village…there are even tales of willing “victims” to his thirst…I still visit the village every year in search of the great Illanipi…

I am still single and very much in need of a good hammering from a fine man with a huge cock and an insatiable demon…maybe I will let Illanipi find me…Call me. I’ll tell you what I have planned to tame The Sex Crazed Manitou!