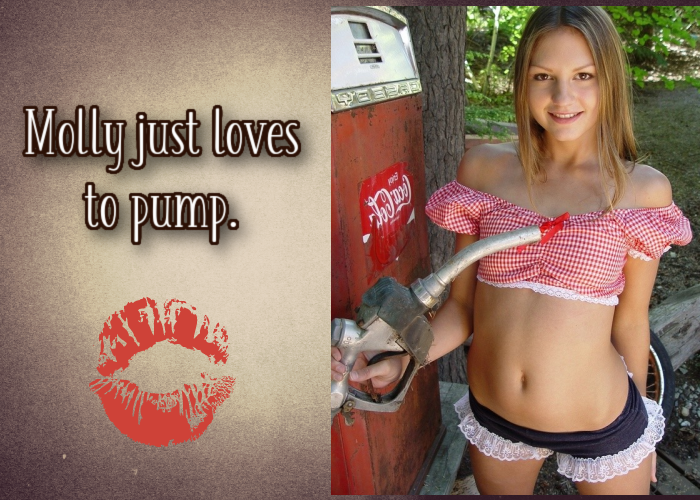 If you haven’t met the self-service whore from the gas station, you have not lived yet!

Molly was never the brightest bulb in the house, but her daddy always knew that she could do basic stuff.  He encouraged her to work minimum wage jobs.  Now, maybe a service slut was not what he meant, but that is what she became.  In truth, Molly loves her day job and would work the pump forever if she could.

You may be wondering how such a small-town gas station became such a popular stop for truck drivers.  It all began in June. Molly was clocking into her service slut shift when she noticed two men bickering at the pump.  She wandered outside and leaned against the semi, and asked them if she could offer any help.  Her new friends, Greg and Mark, were having a dispute over how they should pump gas.  Mark was new and believed that Greg made it too complicated.

As a self-service whore, Molly felt that it was her job to show them that it was not so difficult a task.  With a smile, she opened the truck door and hopped in.  At first, Mark was irritated, but Greg caught on quickly.  He told him to shut up and get into the vehicle.

Inside the truck, Greg pulls down his pants’ zipper and whips out his rock-hard cock. Mark immediately began blubbering, asking what the heck was going on.

“Teaching ya’ll how to pump sweetie!  This is how we do it here, anyways.”

She grabbed Greg’s cock and began slowly pumping it.  He threw his head back, moaning and feeling her soft, warm hands on his cock. She took her other hand and started rubbing the crotch of Mark’s pants before working down the zipper and slipping a few fingers in.

Mark was nervous, and Molly could tell.  His cock was flaccid and small.  As a service slut Molly knew what to do with a limp nozzle.  She pulled it out and put her mouth around that cock.  It begins to swell instantly, stretching her mouth to accommodate his girth.

Once both parties were hard and ready, she continued giving them both a hand job. Pumping was something she excelled in, and she was more than willing to share that gift with any man who needed some help.

It was hotter in the truck than outside, and she could feel the sweat dripping under her breasts.  Still, a job well done was always worth the hard work.  Twisting slightly at the head, Greg’s thighs and balls began to tremble and tighten. It was obvious that she was getting close to her end goal.  She felt his sperm run down her hands and wrist, and she slowed down the pumping and worked on Mark’s member.

After all the hard work she put into being a quality service slut, Greg and Mark were sure to tell their buddies at other stops what a wild gal Molly was.  Before long, the station was always full of truckers asking to have pump instructions.  Molly was plum happy, and so was her boss. Of course, there were lots of rumors around town now.