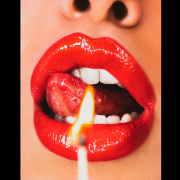 A secret affair threesome was never something I thought I’d get into, though I definitely daydreamed of one. I had a handsome boss at one of my previous jobs. He was gorgeous and sexy, and I wanted him for myself. For a while, I worked in a marketing office. It belonged to a company that had recently come here from South Africa. The owner was my boss, and I took care of a lot of the design work for him, so I reported directly to him. He had the sexiest accent I’d ever heard. It was strange enough that he caught my eye because I’d never really given olden men a shot. I mean, I’d flirted with them before and shown off, send nudes, and done a lot of naughty stuff. However, I’d never considered going all the way.

But I wanted him, and I wanted him bad. He opened up my eyes. We started to fool around a little because I flirted with him all the time. I don’t think he knew how much of a tease I would grow to be. After all, I’d always been the bad girl at school, sending nudes and sexting in the middle of class. He had no idea that I would soon be doing that to him during work. After all, I started off looking like a “good girl.” So, it caught him by surprise as I progressively let him see the real me. The crazy, wild, sailor-mouthed tease that started introducing him to a bunch of my party friends, and showing him how to have a good time.

He grew to love the wild side of me.

Within months, he was cheating on his wife with me. It all happened in the office, of course, and never outside of it. He’d save any pictures I’d send him and hide them in a locked app on his phone that looked like a boring game. However, he was all mine as soon as he walked through those doors. I knew his ultimate weakness: the dirty, teasing pictures I’d send him when he was trying to focus on something. Every time his phone buzzed, he’d be compelled to look at it in hopes that it was a picture or sext from me. More often than not, it was! I was always pining for his attention and would call him usually during our lunch breaks. We’d eat lunch separately not to make anyone suspicious, but we’d sneak off and have the best phone sex of our lives.

One day, we decided to cave into our lust on the lunch break. I stole him away to the men’s bathroom just down the hall. He had me pinned up against the wall, not being very discreet. He slipped his hand around as he had me against him so that he could give me a hot hard spanking that I’d been begging him for all morning. We were hardly in the stall! And we’d left the bathroom stall door wide open. But nobody ever went to that bathroom – or so we thought. Just a few minutes into me, stripping him down and him holding me up, the door to the bathroom swung wide open, and someone walked in.

Hot, heavy, and about to fuck, and we panicked.

We looked over, horrified to find that it was one of our co-workers, the central sales rep, Jason. He was the co-owner of the company and shared the large office with him. I blushed, caught utterly embarrassed at the situation. The problem is before I started fooling around with the boss, I’d fucked him too! He knew what I did with those pictures and how naughty and dirty I could be with my teasing. And he also knew that I was a sucker for the idea of a threesome. Had he done it on purpose? I had my suspicions that he knew what was up.