Schoolgirl Teases Nerd With Her Short Skirt And Panties 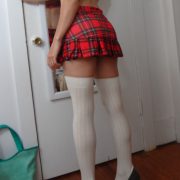 The classic schoolgirl teases nerd with all she’s got.

A schoolgirl teases nerd boys every second that she does so much as merely exist. I swear that’s the whole reason I was put on his earth. There used to be this really cute guy in my high school class who I didn’t really have the chance to talk to. It was a mess and it was a thorn in my side that I had not tormented him yet. I was a BIG flirt, so I had no problem stirring up some trouble and manipulating people into what I wanted them to do. All the boys flirted recklessly just like I did. They just had no idea that I was better at it than they were. So, I played all my cards and made them get attached to the cute, flirty gamer girl.

But I got sick of playing with the hot guys.

There was no challenge anymore! Nothing changed for me. They were all football players, basketball players, and generic jocks who were a dime a dozen. After all this time I spent flirting with them, I wanted to try something else. Besides, what if I could get something better out of it? So I changed my target and went after the nerdy guys. Poor boys didn’t know what was coming. I didn’t know how to start off. It was about to turn into a classic situation where the schoolgirl teases nerd boys right into doing everything she asks of them. So far, I didn’t get a problem getting what I wanted. When I was little, I pushed people as far as I wanted. It was always so I could get my way.

Manipulation was just kind of my thing.

Once I realized that I could tie that in with sexuality, it became my best weapon. So after sizing them up a little, I figured out what to do. They were smart enough to see my reckless flirting a mile away. So, I couldn’t just openly bribe them into something. I had to play the part well. Therefore, I dressed up to look the part. After all, the end goal was to get their help – and end up having them do all my homework for me. It sounded like a tall order, but I wanted it. I started off by dressing modestly for a few weeks. Just the usual, dressed-down, tight jeans and a tank top for me.

Sometimes a little cleavage was fun to show off, or a cute little schoolgirl skirt, just to get their attention. I started chatting them up. Soon enough, they were in my corner. They knew me by name, and we’d talk a little during class every day. Sometimes I even got them in a little bit of trouble, and the teacher would tell us to stop talking. I gave them the rush they wanted. Sometimes I even wore my cheerleading uniform all day on game days, to help their fantasies.

As soon as I’d made special friends with one.

I invited him over after school one day just to hang out, study, show him a few of my video games. After a little while of that, I pushed him back on the bed and made my move. One hot, steamy night of teasing, flirting, touching, and driving him crazy as no other girl had before. From then on, he called me his young cheer slut. It’s safe to say I got what I wanted. Whenever he started to wonder if all the extra homework was worth it, the naughty little schoolgirl would make a house call. 😉 Craving a little ageplay phone sex and a chance to get the schoolgirl all to yourself?