Savage Gang Rape: Tied Up and Taken Advantage of by Countless Men ♕ 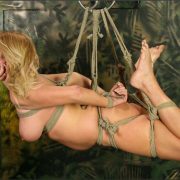 “Savage Gang Rape by Unknown Assailants!” was plastered all over the news last week.

The savage gang rape was on every channel this morning as I had my coffee and got ready to head out. I went about my daily routine without giving it a second thought. Nothing like that could ever happen in my quiet neighborhood, or so I thought. Out on my morning walk a white van pulled up next to me. A good-looking man inside asked, “Where might I find North West Street?”

Before I could say a word, the side door swung open and I was snatched inside. The person who had grabbed me quickly pulled a bag over my head. How could this be happening to me?  I live in a nice neighborhood, nothing bad ever happens here!

There was no time to think, fight, or get away. I just sat there frozen in fear of the unknown. With no idea where they were taking me or what they might do to me. I kept asking what they wanted, but all I got, in a very husky voice was, “You’ll find out soon enough what we have planned for you, Bitch!”

We came to a stop after what seemed like an eternity.

It couldn’t have been more than an hour, but it felt like forever.  The one who had grabbed me had tied my hands behind my back. As they pulled me out of the van, I didn’t struggle, telling myself if they were going to hurt me, they would have already done it. I would find out soon enough that wasn’t the case. We entered a door that opened up to a large space. I could tell by the sound inside the room. There was no way of knowing just how many, but the fact that a lot of new people were now around me was obvious. I could hear different male voices saying things like, “You got a good one this time!” “She’s got a great body!” ” Get out of the way, I want to see!”

This was just the beginning of my savage gang rape.

My head was in a daze of fear, confusion, and…excitement. I was grabbed by one of them, it may have been one of my abductors or it could have been anyone. Not that it mattered much, they would all take whatever they wanted. I felt more hands on me ripping my clothes off a piece at a time until I was completely naked. As they tied more ropes around me, I felt my feet lift off the floor, hanging there for all to see. I could tell they were all going to take part in this savage gang rape.

Rough fingers suddenly rammed into my exposed pussy and rubbed over my clit making me cry out!

Satisfied with what he found between my legs, he shoved his cock straight into my tight hole without any further warning. I hated that this was happening to me…or did I? My pussy told a different story, and happily produced lubrication for his thrusting cock. I was tied up and couldn’t do anything but take what he gave me. With all the other guys rooting him on I felt his hot load blow inside me. I knew they would all take their turn in this savage gang rape.

He was the first of many, I didn’t dare try to keep count.

My pussy was nowhere as tight as when this first began.

This had taken a nice turn, but it didn’t last long at all. Once I felt the head of his cock on my tiny hole, I knew what was coming. With a hard thrust he was balls deep in my tight ass. I screamed out in pain, but the savage gang rape didn’t stop till all of them had blown inside my now gaping hole.

Now, every time I see a white van my ass starts to ache and my pussy starts dripping!

Call me for all your rape fetish phone sex and let me make them come true for you!