Santa’s College Slut Sucks His Cock in the Dressing Rooms 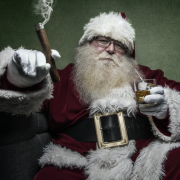 Santa’s college slut got on the top of the naughty list this year. Can you guess why? No, silly, this time it had nothing to do with that college girl threesome I got myself into. But I sure do get myself into some interesting situations… This storytime is all about the time I was a raunchy little elf that got to suck Santa’s big fat cock. I scored a nice seasonal winter job at the mall last year as one of Santa’s elves. Of course, I was one of the ‘naughtier’ ones that got to hang around closer and keep him entertained all day! We took pictures upon pictures, some of them featuring me on his lap instead of the visitors.

But the fun all kicked off one day that I came to work early. It was cold out, so there was no way in hell that I was waiting around outside in my car. I scurried into the mall to grab a nice hot coffee. Of course, I still had to kill about thirty minutes’ worth of time before the shift started. So, Santa’s college slut wandered into the fitting rooms with my nice hot coffee. I wore my tiny red skirt half of the costume, but I didn’t have the full gear yet. On top, I wore only a little black tank top that showed a lot more cleavage than anyone would allow in a picture. But in the fitting rooms, all was fine.

I sat around and prepped myself.

I curled my hair; I did my makeup. All this time, I sat around until I heard the sound of someone else entering the changing rooms. The footsteps came with the thundering sound of them plopping down a heavy pair of boots. Santa was here. As someone with a very soft spot for some handsome older men, I couldn’t help myself. I wandered along into the changing rooms to say hi. Coffee in hand, I leaned against the lockers as we chatted a bit. But in the midst of one of his jokes, I giggled hard enough to spill some of the coffee on my shirt. And it was HOT! With a squeal, I pulled the shirt off of me without hesitation, leaving Santa staring in delight.

That’s how I got myself on the Naughty List for sure if I wasn’t there already. Can you imagine? You’re a handsome older man, and you’re enjoying some peaceful conversation before work. Suddenly, Santa’s college slut stands right in front of you with her top off and her tits out and perky in a push-up bra. He could not take his eyes away, and I saw that familiar blushing on his cheeks. The bulge grew in his pants, enough that it couldn’t hide behind the thick red cloth. With a little smirk, I closed the distance, closing into stroke my hand up against Santa’s cock.

Tits out, ass out.