Sailboat Lessons Become Sexier Than I Would Have Imagined ♕ 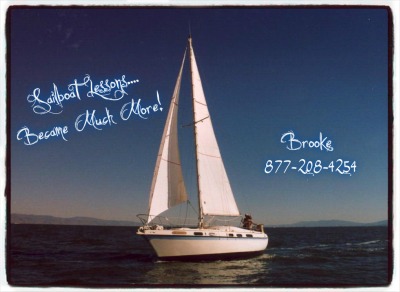 I definitely wanted to drive his sailboat!!

I’ve had sex in quite a few places but never on a sailboat. I ran into this sexy man at the docks after being out on the water with some friends. He was nicely tanned and his hair was a little windblown as he stepped off of his sailboat. We were both preoccupied not really paying much attention to our surroundings. He stepped off of his sailboat at the exact moment that I was in front of him and we collided together. I almost went off the dock into the water but his strong arms held me tight and pulled me back. The force of it all landed him on his butt with me right on his lap.

I apologized profusely as I tried to right myself. But the moment I looked up into the eyes of the man that caught me my train of thought vanished. There I was in the lap of a stranger, speechless and feeling awkward as soon as I realized I hadn’t moved to get off of him. When we finally got our bearings he introduced himself as Mitch. My friends stood there laughing and I knew I should go with them, but something told held me back. I wanted to get to know this sexy stranger a little more.

He asked if I’d like to go have dinner with him since we had both been out on the water all day. I agreed and told my friends to go on without me. We ended up talking until almost midnight. By the time he dropped me off at my house we had plans to go out the next weekend for some lessons on his sailboat. I was pretty excited because I had never been on a sailboat before but had always thought they looked amazing and peaceful to have out on the water.

The weekend came quick. I met Mitch in the parking lot of the marina and we laughed about our encounter as we walked down the dock to his sailboat. We finally made it out onto the open waters where I was able to take control of the sailboat and begin our lessons. As I took hold of the wheel Mitch stood behind me showing me how to place my hands, how to steer and turn. I was excited to learn but honestly having his body pressed against the back of me was a little distracting.

His hands were over mine as he tried to teach me more but I couldn’t help myself anymore. I leaned my head back against him and closed my eyes for just a moment breathing in the amazing scent of his cologne mixed with the salty sea air. His strong hands released mine but soon were wrapped around my body, pulling me tighter against his. The palms of his hands cupped my large breasts. As he tightened his grip and began massaging them I felt his hard cock against my lower back.

He took one hand from my chest and traced his fingertips down my stomach and into the bottoms of my bikini. I wanted his fingers to feel how wet I had become so badly that I stood on my tippy toes to try to get him there even faster. Being on my toes his finger easily slid through my dripping lips to my tight hole. As he started fingering my pussy I pressed my ass tighter against his cock. My body started to move without me even thinking about it. I rode his fingers, grinding my pussy onto them while at the same time rubbing his cock up and down the crack of my ass.

I let out a small whimper as he pulled his fingers out of my bathing suit. When I felt them touching my lips I gladly opened my mouth to suck off the sweet juices.

I felt him moving behind me as he released himself from his shorts. Once he was exposed he slid his fingers into the top of my swimsuit bottoms and pulled them down my legs. He was quite a bit taller than me so I knew he had his knees bent when I felt his cock rubbing up and down my wet slit. I lifted myself up onto my toes again but this time it was for way more than his fingers. As I raised up onto my toes his cock found the hole it was searching for and slowly slid inside of me.

Inch by inch he stretched me open. I didn’t know if I was allowed to let go of the wheel at all since I had never operated a sailboat before so I gripped it even tighter. It actually made it easier to stay on my toes if I held on but damn my grip on it was tight!! He slid his hard cock in and out of my tight hole as my body did all it could to keep up with him. The fact that he was so much taller than me made his cock reach depths that I have never felt before. He had me impaled on his cock and I fucking loved it!

He grabbed a hold of my hips and began thrusting his dick up into me harder. Moving in and out of me even faster the angle he was at hit every spot inside of me just right! Before I knew it I was gripping the wheel of the sailboat so tight that my knuckles turned white. My orgasm took over like never before! My body tensed up as cum poured out of my pussy like a wave from the ocean around us. Once the floodgates had opened my pussy began to spasm around his cock. That was all he could take. The feeling of his dick growing even harder inside of me just before it unloaded into my pussy was amazing!!

He held onto me tightly as wave after wave of his seed exploded into my unprotected pussy. I couldn’t believe how intense both of our orgasms were. I had never experienced such an earth shattering climax. Maybe it was because we were out on a sailboat surrounded by nothing but the blue ocean with the smell of the salty sea blowing into our faces while our bodies were connected. I don’t know but I couldn’t help but hope to get to do it with him again. Have you ever had an experience so earth shattering like this that you just couldn’t get it out of your head and nothing has compared since? Give me a call, I’d love to hear all about it and share some more stories with you as well!