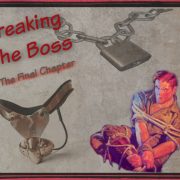 Two women held him down and a jolt of pain took him by surprise. Maybe it was worse than our defeated sissy bitch thought it would be. I could see him trying over and over again to scream through the gag but he could only manage a pathetic muffled sound.

Is this the end for boss, man?

No, not the end OF boss man – this is not that kind of story.  But it is the end for boss man in my basement.  In fact, after Emma was through with him, we gave him a much-needed break. We didn’t go far, but we left our ruined sissy bitch alone for a while as we talked about the next steps in our kidnapping and revenge plot. We hadn’t given much thought to the end of it, but we realized that he couldn’t take much more punishment without completely losing his mind. But we also realized that he couldn’t live in my basement forever.

We all decided that we had taken sufficient revenge against the boss man and that he wouldn’t be any more trouble to women in the workplace – or any place for that matter. Plus, he had lost his job long ago for abandoning his position. Deservedly, his former assistant Emma had taken over his position. Presumably not working topless anymore, although what she does in her private office is her business, I suppose.

Keeping a man in your basement

Keeping a captive for years and years is probably not as fun as it seems… And none of us were really interested in keeping the ruined sissy bitch. We needed to return him, but we had a few priorities:

And so, just like the first day, everyone gathered in my basement — all of us ladies, Brad and his friends and Emma’s husband.  Even our ruined sissy bitch’s wife and her new boyfriend/our ruined sissy bitch’s old boss came for the final performance. Brad had the task of buying a device that should take care of priority #3 – at least for a while.

He pulled out a nasty-looking steel cock cage with an enormous padlock. The lock was undoubtedly much larger than the typical man in chastity would require.  This chastity device was known to be one of the most escape-proof. It had inner spikes, a urethral tube (yikes!), a tight behind the balls ring, and was a wholly enclosed steel sheath. Of course, it was size extra small. And in a bit of overkill, it was also all attached to a steel chastity belt.

We decided to let the boys handle the installation of the scary-looking apparatus.  First, they picked him up and tossed him onto his back on the bed. Brad, who seemed to know a lot about chastity devices, was in charge of the device.  The rest of the men held him down.  He was truly a ruined sissy bitch at this point. I lightly sedated him, which would also be useful later.

Finally, Brad managed to wrestle our ruined sissy bitch into the device and the belt. His tiny dick was locked safely away. His wife suddenly realized that someone would have to keep the key to that huge padlock.  She expressed that she in no way wanted that responsibility. Brad said that no one would have to keep the key as he clicked the lock closed, locked it and tossed the key onto the floor. He then reached for a tube of glue that said “world’s strongest bond.”

Our chastity device expert then applied what was apparently a very strong bond into the lock’s keyhole.  And he squeezed it into various hinges and joints in the belt and the device. That device was not coming off any time soon. Not until he found someone to cut him out of it, which would be complicated because of the ultra-strong glue all over it. And the inner spikes. And the urethral tube (yikes!)

Our final goodbye was to carry our sedated and ruined sissy bitch back to the same van that we used to capture him. We all piled in, and boss man’s wife showed us the way. Soon we pulled up in front of boss man’s parents’ house just as he was waking up and realizing that he was no longer chained in my basement. We pushed him out of the van and dumped him onto their front lawn. Almost immediately, we heard the front door open and saw his parents peering out the door. And then, very quickly, we heard the door close and the click of the deadbolt locking. Oh well….

Next up… I have no idea!  If you have any suggestions, let me know!

And if you want to talk about sissy phone sex, need a bit of my own special brand of sex therapy or anything else, just call me for the best phone sex you will ever have…