Oh! Not me!  Him! Haha.  What shall I say?  He’s happy (I thought!) as my faithful cuck for years now. And we LOVE rough sex!  Exiting the shower I was slammed to the floor out of nowhere!  Immediately, I was gagged and blindfolded. WTF?  I didn’t know who it was, or what he wanted, but my blood coursed through my veins light lightning through the sky.

In fact (and don’t quote me on this…I’ll deny it. LOL), I was wetter than when I was in the shower.  My thighs, coated with the female version of pre-cum and sliding against each other.  Obviously, I was concerned about my plight, but something whispered that I’d be okay as long as I succumbed to his will.  I could hear it in his voice.  That dangerous murmuring, jagged and breathy as he barked his instructions. Soon, fear would will out and I knew…

Rough Sex was very much on his agenda.

He hit my head against the door jam and the room blurred.  I came to on the rug in my bedroom.   He had started without me!  Fucker!  His dick, huge and thick, was pounding my pussy like a jackhammer!  And I instinctually clenched with each thrust.  Apparently, that only made him harder!

But, can I really call it assault when we could both feel the sexual tension?

And the realization that although he LOVES being my cuck, every now and then, he has far darker desires?

Sometimes, he just liked it ROUGH as hell!  And, by that I mean, ROUGH!  He dragged out the whole bag of tricks and taped my mouth shut, tied my hands to my ankles and bent me over his thighs before whipping my ass with his riding crop until the tears fell freely from my eyes.  That mother fucker!

He had bound, gagged, whipped, and fucked me senseless and now was his coup de grâs… He invited every man I’d made him cuck and bow to during my sexcapades and then he humiliated me in front of them ALL!  Then, he invited them to humiliate me too!  At the present time, there was nothing I could do.  So, I laid back to enjoy the punishment.  Did I mention it was BRUTAL?  Well, it was.

Who would think they all harbored such anger at women and I’d be the sacrificial lamb!  I guess someone had to pay for all the aggression towards women.

For this reason, Reverse-Cuckold Sex can be the cure for all that ails you!  Obviously, it’s a giver of power to the eXXXtreme. But, it also shows a trust and commitment that’s rare to find.  Moreover, I think my man and I have an ummmm…unusual give and take.  You might say I can read him cum-pletely.  But, BE CAREFUL!  Heavy is the head that wears the crown.  What you give, you may soon receive. 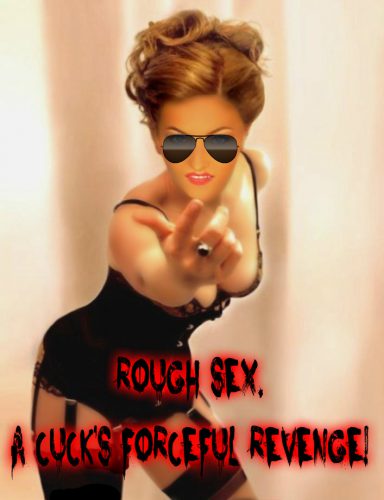