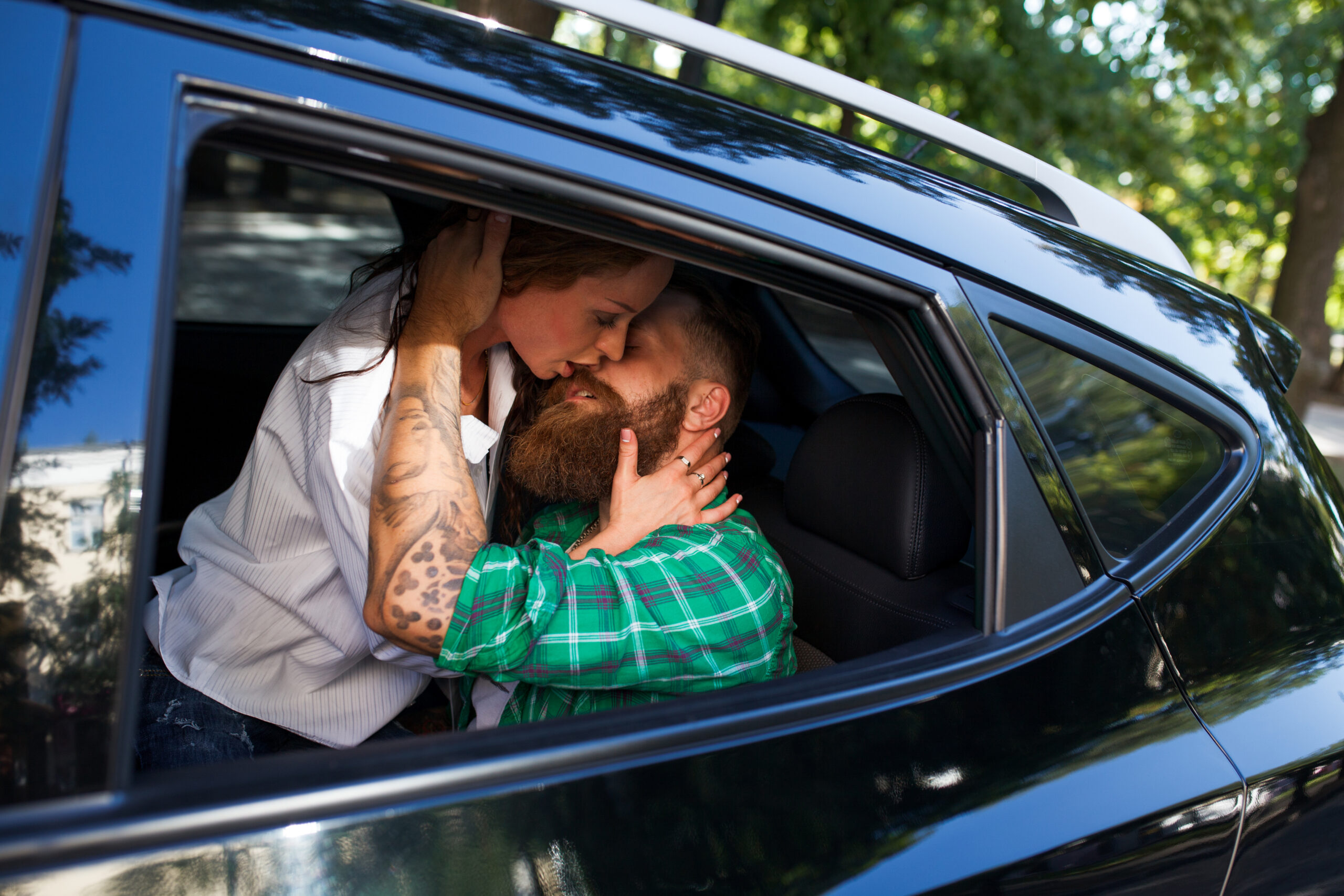 I adore driving my car, it makes me feel super relaxed and gives me a minute to gather my thoughts. I usually take a little trip along the coast with the roof down, letting my hair fly and enjoying the sun. Sometimes if I’m feeling devilish I like to dress up sexily and go cruising for hitchhikers. I love road head!

I thought about cruising down to a spot at Hollywood beach, it was nice down there and I had met a few rather tasty men there previously, so I decided to gas up and go.

As I pulled up to the gas pumps I saw a young, scruffy-looking guy with a sign loitering outside the store doors. He looked unkempt but I couldn’t help but notice that he was a sexy little thing, with a nice frame and a handsome face.

He instantly saw me as I began to approach, and I could tell from his expression he liked what he saw.

So, I stopped, took $5 out of my purse, and held it out. He tentatively reached out for it and I pulled it away playfully. ” You want this?” I said, teasing him. “Please Ma’am, I need to get to Jacksonville but I’m flat broke.” I giggled and lowered my sunglasses. I could see he had some potential and my devious mind was already working overtime. “What if I told you I would drive you to the bus station and give you the money for a ticket?” I asked. His eyes lit up and I could tell I’d made his day.

Without another word he was on his feet and had gathered his few belongings. “Whoa boy, steady now. Go in and pay for my gas.” I gave him $50 and watched as he entered the store. I walked back to the car and pumped my gas. As I pumped I saw him coming toward me and as I looked up I caught him looking down the front of my blouse at my ample cleavage. I caught his eye and he looked away sheepishly.

We got in the car and I began to drive, in awkward silence at first but I was relishing his nervousness. Finally, I broke the silence. “Don’t you want to know what I want in return from you? For giving you a ride and buying you a ticket?” I said, giving him a serious look. “Erm, no Ma’am.” He said, with a confused look. “I want sexual favors,” I said without pause, matter-of-factually.

Bless him if his little eyes didn’t light up!

He thought this was turning into the best night of his life! Little did he know!!! As I drove I began to slowly unbutton my blouse, revealing my perfect tits. “You like?” I asked, running a finger across one of my nipples poking through my bra. “Yes Ma’am!” He exclaimed, and without another word, I reached over and put my hand on the back of his neck…

After pushing his head down to feast on my juicy tits for a minute. I reached over and rubbed his trouser snake (which was very pleasing in size I must say!) through his pants. He was using both his hands to push my tits out through the holes in my bra and taking turns rolling his wet tongue over each nipple.

I could feel myself growing hard inside my panties, and I knew it was time for my reveal. Held him by a fist full of his hair and steered with my knees. I used my hand to pull up my skirt. I saw him recoil in shock a little and his mouth fall open, so of course, I took the opportunity, pulled my panties to the side, and shoved my hard cock into his mouth. He sputtered a little at first but didn’t put up too much of a fight.

I enjoyed fucking his throat and feeling him gag on my dick, and before long he was bobbing his head up and down on my saliva-wet and throbbing member like a pro!

I pulled the car over at the next rest stop and ordered him out. His road head just wasn’t good enough.