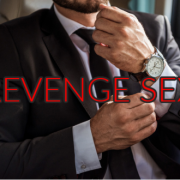 Revenge sex is a dish best served…black.  Black lives matter?  All lives matter, some would say.  Systemic racism and injustice?  Not real.  In fact, the CEO of Oswald Incorporated was prepared to prove this to the world by having everyone switch jobs for an entire month at the Oswald Building just to show that, no matter who you were or what position you held, everyone was treated equally.  Not only did he think it would put an end to this black lives matter shenanigans, but it would make his company look amazingly progressive if its CEO was willing to stoop down to the level of the noisy ni– ‘disgruntled common folk’.

We’ll do it live!

Mr. Jason Oswald even held a press conference where he would draw his ‘new job’ from a hat.  Now, being the CEO, he wasn’t actually intending to risk the worse jobs and had a hat set aside with papers that all said the same thing; Executive assistant; a do-nothing job that still paid six figures because it had the word executive in the title.  It was a pay cut, but he’d suffer in order to make his point.
What he didn’t realize, though, was that he wouldn’t be choosing from that hat.  A big show was made while bringing out a hat with every job title placed inside.  This was confirmed by a diverse selection of people invested in making sure that justice was done.  You know, just to keep things fair.  Under pressure and on camera, this CEO had no choice but to concede.  He reached in and pulled out a sheet of paper.  He was no longer Mr. Jason Oswald, the CEO of Oswald Inc.  Now, he was just Jason Oswald; a coffee boy.  He had to make it an entire month withOUT getting fired.

It turned out that people actually expected you to be early so that coffee was ready and delivered to the upper management coming in, well, when they felt like it.  They truly were embracing their roles.  Shanice was not pleased by his tardiness and threatened to fire him for insubordination…unless he was willing to convince her to keep him around.  She said this while undressing her legs, revealing absolutely no panties.  Did…did she actually expect him to…eat her pussy?  The clock was ticking and her hand was inching even closer to the phone.  What would the headlines say?  “CEO who says systemic inequality isn’t real, couldn’t last one day delivering coffee.  The writing was on the wall, and he dove in and devoured that black pussy.  Demoralized, he left her office with squirt all over his chin.

The revenge sex doesn’t end.  Now, yes, under his lead, certain company positions required certain attire.  However, did he really have to wear such a short skirt?  especially around all of these donkey-dicked black men he had to deliver mail to?  Seriously, there’s no need to show off so much.  In fact, 4 inches is considered quite adequate for most women according to his mother.  The Hispanic employees embraced the existing policy.  Poor Jason would walk down the hallway with coffee and mail only to be catcalled by someone passing by.  Someone even slapped his ass.
“Get a move on, white boy,” said one girl who’d gone from clerk girl to operations manager and seemed to be doing a pretty good job at it.
“You dropped something, boo,” another woman said before giving his asks a squeeze when he bent over.
Going from one level to the next was the world.  Someone always had an excuse to need to get on the elevator with him and, despite space, he found himself feeling someone’s boner pressing against him throughout the entire ride.

It sounded like a solid plan, and it was what he’d expect any other employee-facing harassment to do.  He was forced to wait hours before anyone would see him.  Finally, he aired his grievances.
“Well, well.  That is quite the story!  Don’t worry.  I’ve written everything down and promise you that someone will see that certain policies are changed within six to eight weeks.”
“Weeks?!  I was blackmailed and sexually assaulted.  Doesn’t that mean anything to you?” Jason argued while trying to keep his eyes up.
The transgender woman behind the HR desk, now proud to show off her position of both tits and a huge ride-me cock now that she held a position of power, started to stand.  “Well, I could have something done about Shanice by tomorrow…if you do something for me.”
Jason couldn’t ignore it.  He saw that fat clock harden and poke through the skirt dripping pre-cum right in front of him.  It sucked but some justice was better than none, right? He fell to his knees.

Shanice was no longer a direct manager of Jason.  HR’s response was to move her from her current department to executive status.  You know so that she ‘learns her lesson’.  After an incident with the black employees in the break room in which no one really saw what happened but Jason was nonetheless left covered in cum, he was starting to be known around the office as the boy who cried rape.  He was definitely treated worse for it and learned it was better to keep his mouth shut.  It’d be pretty easy to fire him over something small.
At first, all this revenge sex took a toll on his mental health, but seeing as how he wasn’t covered for that due to his position in the company, he chose to suck it up.  By the end of week 4, Jason had become used to the harassment.  He hardly even responded to his name anymore, and instead tended to get a move on when he heard “Gringo” or some other such ‘pet name’.
“One more day, and it’s all over.  Just one more day and the black lives matter bullshit ends,” he reminded himself as he felt the sum dribble from his behind or, as most called it, the office fuck hole.
One more day?  What do you think, readers?  Should all of this revenge sex end in one more day for rich boy Jason?  Or do black lives matter after all?  Call my phone sex line and let me know.