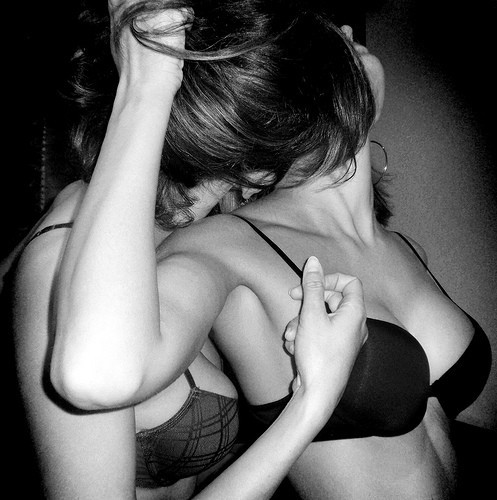 I hate when brother gets a girlfriend. It really messes things up for me, especially when he likes them a lot! He’s been dating a girl that I went to school with. She was always such an obnoxious little bitch! If I got a new dress, so did she. If I got a cool new purse or pair of shoes, the next day, she came to school with the exact same thing! It’s like she wanted to BE me! And NOW she wants my brother too? I asked him to not go out with her, and he said he wouldn’t if I didn’t want him to. But then later, I was leaving the movies with a date, and I saw them walking out together! Not only is he seeing her, but he’s lying to me about it? That’s when my revenge fuck plan started growing!

The next day, I called Katie up (I even hate her NAME!) and told her I knew she was seeing my brother, and that I thought we should make peace and be friends if they were going to date. She was snotty, as always, but agreed. What an idiot! She’s so full of herself she thinks I would ever REALLY bury the hatchet with her and kiss her ass? I had to laugh a little. I asked her not to tell my brother, because I wanted it to be a surprise that we made up and were getting along. She agreed, and I invited her to our house, saying my brother was going out with friends tonight and wouldn’t be home.

Later, I went into his room, dressed in my skimpy lounging outfit – shorty PJ shorts and a tight, worn out tank top. He really likes tight shirts on me, because you can see my puffy little nipples standing up right through them when I get excited! I made sure to rub myself against his chest when i came in and sat down on his lap, hugging him. I asked him if he was busy tonight, and he said no, he had to work later this evening, but then he was coming home to study for finals. (Which I already knew.)

I nuzzled up against him and told him that I would help him study.

He just smiled, knowing that what I actually meant was I was going to fuck his brains out and do everything BUT help him study! We made a date to meet downstairs, out of the earshot of my parents, as soon as he got home for our taboo, incestuous romp. I skipped off happily. Yes, my revenge fuck plot was going exactly as planned!

Katie showed up at our house around 5:20 that evening – fashionably late, as always because you know, the whole world revolves around her! I invited her in and we went downstairs to my parent’s mini bar and I mixed her up a drink. Some fruity little girly drink that I knew she would like because she’s a lightweight. What she didn’t know was that while she wasn’t paying attention, I took 2 of my mom’s pain pills and crushed them up and put them in her drink! I made it EXTRA sweet so she wouldn’t taste the bitterness. =)

We talked about old times for a bit until I started to see the pills taking effect.

She was really chatty, laughing a lot, and very happy – a big change from her usual disposition! Now it was time to play on the dirty little secret Katie thought no one knew about. In school, she had fucked a number of my girlfriends on the down low. She was a closet bisexual. From what I had heard, she really loved girl on girl action! I had dressed in a very revealing little outfit for her visit. I’d already seen her looking me up and down even before she was smashed on Vicodin and vodka!

I leaned in really close and told her I had a confession to make to her. Whispered in her ear that I’d always wanted to kiss her in school. That I often had fantasies of her while I masturbated for all those years I pretended to hate her! Then I sweetly kissed her neck and told her I lied when I said I wanted to make up with her because of my brother. I really just wanted to get her alone so I could have her all to myself!

She was as intoxicated by me as she was the drugs and alcohol, and allowed me to lead her over to the couch to get more comfortable.

That was when she confessed to ME that she’d always had a crush on me as well. That’s part of why she was always so mean to me. She didn’t want to have “those thoughts” about  me, but she couldn’t help herself! Aww – how cute! HAHA! I pushed her down into the couch and ran my hands all over her relaxed body. She cooed in my ear about how good I was making her feel.

I told her she hadn’t seen anything, yet! In seconds I had her tight little skirt pushed up and her panties off, positioning myself between her legs. Before she could even react my tongue was buried deep inside her tight little snatch which admittedly, tasted very sweet. She was moaning and whimpering and grinding her pussy into my mouth. Begging for more and that’s when my brother walked in the door. His eyes widened in shock at the sight of his newest conquest, begging for his SISTER’S tongue deeper inside of her!

Revenge fuck plan complete.
I know, I’m a dirty little brat. But YOU know you love it! =)