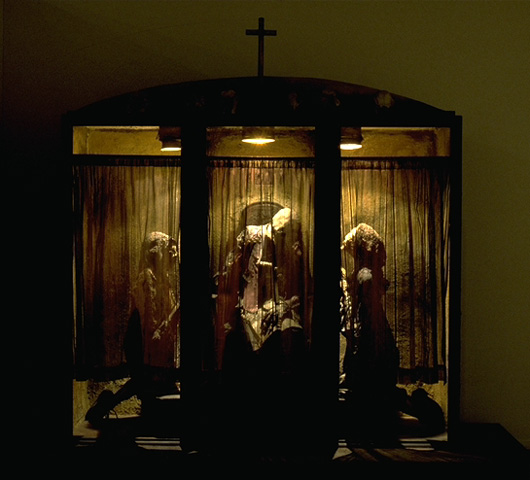 The pastor’s religious taboo fantasy incorporated a few immoral things. Things that would make most church going folks blush and run away. But not I.  I was more than ready to take on the challenge and also make him confess his sins to me. By getting a sneak peek in his raunchy journal, I knew just what thoughts were running through his head.  There I was on my knees, his cock rubbing over my lips.

“Are you ready to confess Roxy?”, he asked and I shook my head no.  He smiled, yanking my head back and shoving his throbbing cock into my mouth.  You see, I knew he didn’t want me to confess anything. It was a game to him. And a game I wanted to play along with. He wanted to feel the thrill of torture, the excitement of a rape, punishing me for my sins.  His religious taboo fantasy was going to come true!

He laughed as he fucked my mouth like a jack hammer trying to break through concrete.  It was over as quickly as it had started. Grabbing my arm, he pulled me up and pushed me over his desk. Ripping my dress off he exposed my bare ass. Not expecting to see such a scene, he leaned over and whispered in my ear. “You are a dirty slut aren’t you!”.  Feeling his hands caress my ass and then move up my back made my pussy wet. The unknown of what was about to happen was totally erotic.  His left hand gripped the back of my neck, holding me down on the desk as he reached across and grabbed his belt.

Feeling him moving the leather strap across my buttocks I suddenly knew what was about to happen. I knew the moment he lifted his right arm. He took one step back and brought the belt down across my flesh. My body stiffened and I  gasped, feeling the sting of the leather. He unleashed his fury over and over again. Knowing the sound turned him on, even more, I felt his dick throbbing against the side of my leg.  Then I heard the belt drop to the floor.

He moved behind me, using his feet to spread my legs. His hands slid around my hips and over my mound. He bit the side of my neck and he worked his cock inside of me. With my hair in his hands, he went balls deep. Screaming like a nymphomaniac that hadn’t fucked in months! Giving into temptation I worked my hips in a circle working his cock. He leaned over and whispered in my ear.  “It’s like going back to the Garden Of Eden. Tasting the forbidden fruit! YOU are my forbidden fruit, Roxy! I’m going to rape you”.  Turning me around his serpent tongue slipped into my mouth!

“Do you want to have some real fun?” I said.  The pastor smiled and shook his head. I’d seen a bottle of Jack on a shelf behind his desk.  Pushing him away I walked over to retrieve it in nothing but heels. “Lay down on the floor pastor. It’s time to take your first lesson in taking adultery to a new level.”  Straddling over him and holding the bottle by my lips, I let the liquor flow. Cascading like a waterfall between my tits, down my stomach and mound and onto him.  “Open your mouth and drink pastor”, I teased, and he obeyed.

“Nothing like being tempted is there!  Look at this body. Stroke that cock to me pastor! Tell me how badly you want to fuck me. Tell me how much better I am than your uptight wife!”.  Hearing those words he moaned, feverishly stroking his cock. I sat down on his chest, my pussy just inches from his face.  “What was that you said early about forbidden fruit? Come, pastor just takes one little bite! You can’t deny yourself the pleasure.  Sins of the flesh, isn’t that what it’s called? Physical indulgence? Pure erotic pleasure.”.  As I spoke he kept glancing from my face to that wet pussy on display in front of him.

I knew at that point I could get him to do anything I wanted. The pastor who thought he was once in control was now under my spell. His first steps to his religious taboo fantasy had begun, and I would never let it stop. Not only was I going to tempt him with my intoxicating body; but all those other immoral things as well. His adventure was just beginning. It’s going to be a wild ride, but the pastor is going to do things for me his perverted mind never thought possible!