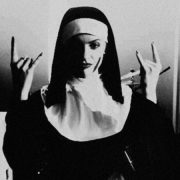 What kind of religious role play fantasy do you keep secret?

There are a few religious role play types of calls that are near and dear to my “recovering” Catholic, fringe spiritualist heart. In my “real life,” i.e. at my REAL house, in my REAL living room, there is no TV in my living room. A prayer stand suits my centerpiece tastes much better. More versatile, for starters. And unlike television, interactive and dynamic. Interactive and dynamic is also exactly the way I like my phone sex.

Perhaps I’m your fellow sinner. Another “sheep” strayed from the Good Shepherd’s “flock,” if you will.

I dream of getting up in front of the congregation, standing right in front of the altar and making an OUTRAGEOUS announcement. Think “fallen woman” taken to new, unimaginably depraved depths.

Growing up, I was raised Catholic. I am confirmed, so it’s technically extra blasphemous of me to say or do sinful, God-denying things. After all those pious years as an altar server and I grew up to be a phone sex operator. Who would have thought?

Dare me to recite the Nicene Creed? Easy. But enough about me. It’s you who’s called for divine intervention. And who knows, maybe you don’t want me to “doom” you, per se. Does the religious role play plotline you crave revolve more around me somehow assisting in your salvation? Eternal damnation is overrated, not to mention a little played out. And don’t even get me started on what I really think about Anton LaVey.

I’ve read the bible so many times I have passages memorized.

Can you even remember the last time you recited the rosary? Well, if I was your vacation bible school teacher during our religious role play phone sex call, that just wouldn’t do. Imagine how lenient that reprimand would be compared to the lashing you’d receive verbally (and corporally, if it’s before that infamous and now long-ago Vatican ruling) at the hands of your Catholic school headmistress.

Then again, we could take the traditional sacrilegious route, i.e. Satanism.

Is it satanic phone sex with a deranged witch Mistress for which you lust? Lust is a deadly sin, you know. And you’re definitely going straight to Hell after a religious role play call with me. Do not pass go, no purgatory necessary. Witch phone sex is one of my personal fortes. And it warms my cold, utterly sick and twisted humiliatrix heart of course!

Shall I give you jack off instructions to the tune of Satanic prayers? Lilith’s teachings? Something comparable or even more “heinous”? Perfect. It’s amazing how much more of a perverted heretic you’ll feel like after even just 10 minutes of Satanist JOI. Plus, why not? It’s not like you weren’t going to Hell, anyway!

Personally, I’m THRILLED to say things no one ever should, Christian or not. Ideally, I like to make YOU say those things, too. Will we make it to “Things No One Should Ever Even THINK” during our intake session? We’ll see how much of an apostate you really are.

I chose “Catherine” for my confirmation name after St. Catherine of Alexandria. Another option: just reenacting some biblical melodrama and sexing it up! I seriously doubt all those canonized ladies were actually “virgins.” It’s thin  Either way, let’s rewrite their endings. Sound good?