The Real Story of Beauty and The Beast! 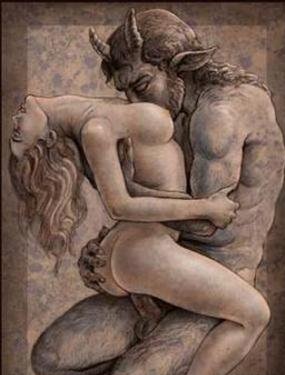 It was the middle of a winter’s night and I awoke, covered in a thin sheen of perspiration. Sitting up, something caught my eye and as I turned toward that sight, I noted it was snowing heavily outside my windows.

‘”How could I be perspiring with it snowing outside?”‘

Now, I’m too young for anything which might cause middle aged women to “glisten” in their sleep! Then, I realized that I had awakened from a dream…into yet another dream. This realization made me shiver and the door to my bedroom slowly began to creep open. A form larger than life, at least for any life-sized human male, eased the door open, it’s long fat fingers gripping the door’s edges, threatening to tear it from it’s hinges.

My heart quickened as the strong scent of him filled the room. A scent almost hypnotic in it’s strength.

“Be STILL, Bitch!”, came the low, grumbling, demonic sound that rocked the room and me to my core. I dared not move. But, the wetness from deep within me began to churn. He smelled it making its descent from my inner, to my outer lips…and the pool of desire began.

Once the door was fully pushed to its limits, I caught sight of the BEAST. It moved swiftly to the side of my bed and in an instant, was upon me, pinning me to my bed with the weight of an elephant.

I dared not scream out, neither in fear, nor pleasure; not being certain of which it currently commanded of me. I lay still, motionless, eyes clenched shut…and willing my legs to do the same. I felt it’s tongue slurp up the insides of my thighs onto the side of my face as I turned away from it.

It’s hand grabbed my face; causing instant bruising as it ripped my head back toward it; my eyes still shut against the horror. I heard the voice, wordless, but still audible…willing me to look at it.

When my eyes opened, I was confused to find a handsome, though heavier than normal, man lying on top of me. His scent still filling my nostrils, I breathed him in deeply. He was like a drug in human form. Swiftly ripping the covers which separated him from me; I got a full view of his entirety. His skin, was white…an almost inhuman pallor. While his cock, was that of a huge black man. The clawed fingers of one hand gripping his girth as he began stroking himself and he prepared to take me; the other hand’s fingers pushed deep inside me.

Stayed tuned for the second part…But if you can’t wait…call me and I’ll tell you the WHOLE STORY!