Real Sex Stories-He Played Me While I Played the Piano ♕ 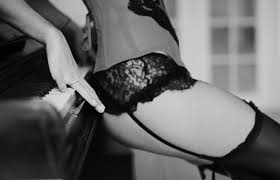 Real Sex Stories-He Played Me While I Played the Piano!

Real sex stories, when I signed up for piano lessons, I never dreamed of the kind of music I’d learn how to play.  Walking towards the door I was a little nervous but determined to succeed.  It had always been my goal to learn the piano.  I had called and booked an appointment with a woman who sounded very pleasant on the phone.  Hoping I wouldn’t disappoint her and prove I had no talent, I knocked.

To my surprise, it was not a cheerful elderly woman who answered the door.  Instead, it was a tall dark handsome man.  He spoke with a heavy Italian accent.  As he smiled at me, I could feel his eyes taking in every inch of my body.  I began to blush and it spread further than just my cheeks.  I stammered when I asked for Mrs. Hinkle.  He waved me inside and I felt his eyes on me as I crossed over the threshold.  He apologized for his aunt’s absence but assured me that he had promised to take care of me.  “Oh yes, you can!”, I thought wickedly.

My breathing grew rapid and shallow

He leads me to the piano, pulled the bench out and told me to have a seat.  For the briefest moment, I felt his fingers graze my ass.  He sat beside me and began stroking the keys seductively.  I could not pull my eyes from his fingers.  At the conclusion of the song, he pulled my hands to the keys and began working my fingers over the ivory smoothness but all I could feel was the heat from his body.  My breathing grew rapid and shallow.

His fingertips began to trail up my arm, to my neck where he pushed my hair to the side tracing from my ear to my collarbone.  He then lifted my chin forcing me to look into his eyes.  “You are beautiful, Simone,” he whispered.  He then dipped his hand between my thighs and massage my pussy.  I grasp at the piano making a horrible sound, but I did not care, I just thrust my pussy into his hand.

He took me by my waist and stood me in front of him, where he slowly removed my clothing.  He then lifted me and planted me onto the keys of the piano.  Pulling his big dick out, he spread my legs apart and with one long hard thrust, buried himself deep inside me.

I would love to tell you more about the music we made that day.  You can talk to me phone sex and tell me all your naughty secrets.  It’s good sex therapy to talk to a phone sex operator.