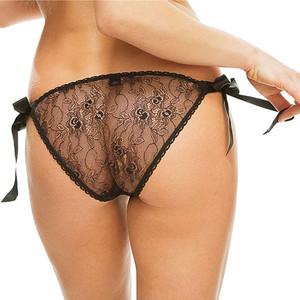 The pulsating started and I immediately started to melt. The intense pleasure was welcomed but overwhelming. I grabbed a pillow for support but my Secret Admirer decided to up the intensity via his remote. We were off to an amazing start.

“So tell me, Raquel. Are you enjoying the gift?”

“Umm-Hhmm” I managed to squeak out.

The panties were so intense I could barely speak.

“Good girl. Well since you’re having such a great time, let’s turn it up a bit.” He said.

I said as another orgasm came rolling out with hot wetness not far behind. The panties were soaked and the sheets were crumpled from me using them for stability and support. But he didn’t stop.

“I love hearing you like this Raquel. Hearing you yell out from pleasure and pain. Not having a single ounce of control over your mind, body, and pussy. I think were ready to hit the highest setting now. The ultimate finisher. Find out how well you can withstand uncontrollable pleasure.” he chuckled while I heard him hit a button.

Suddenly, my knees buckled and my legs grew weak as the pleasure intensified more than I could have ever imagined! The panties vibrated and vibrated, faster and faster, as my pussy squirted juices from deep inside itself. I yelled mumbles of uncontrollable moans. Nothing made sense but the pleasure was something I had never experienced. This continued a few more seconds before I heard.

“Remember this fun time we had Raquel. I let you off easy and it’s not over yet,” he growled.

Then the dial tone.