At the Ranch Pony play 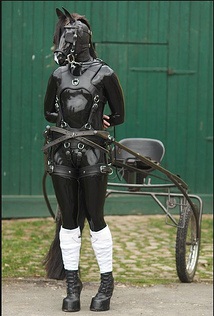 A few weekends ago I got a call from a old friend of mine, me and my boyfriend are still pretty active in the scene but due to his work and constant long hours we haven’t really been able to attend much together. I don’t mind going on my own but some form of company makes it all the more fun. Just when I thought my weekend would prove dull the phone call came!

“Hahaha Jerry how have you been you crazy fucker?”

“One of my girls had to leave early, she picked something up and caused her to have contractions”

“Fuck…i’m sorry about that anyway I can help you out?”

“Actually yea I need a girl this weekend at the Ranch, it’s one of those “Special” weekends”

“Yea I know but you always were quick and I really really need someone, we’ve been friends for ages and you know I would never ever ask you to go outside of your comfort zones or do something I thought would be impossible”

“That’s true, yea i’ll pack a few things and be on my way up to the ranch”

“Alright i’ll meet you there!”

“TaTa darling” I hung up the phone and went about packing and preparing myself for the day, I dare admit it does take a little make up from time to time to help enhance my beauty. Packed and ready to go I got in my car and took the long 3 hour drive into upstate new york to one of Jerry’s ranches. Jerry was a savvy soul whom owned quite a few businesses and properties that were used to conduct said business. He was 8 years older than me and when we first met he was trying to find his way in the lifestyle and was calling himself a switch.

Now Jerry was not only a dom but he made money doing what he had discovered he loved. Reaching the ranch I parked my car. I noted he’d added an addition onto the Wood Cabin were I would be staying, expanded the stables, and purchased more property for more pens. Moving towards the cabin Jerry was outside waiting for me, he looked the same as when i’d seen him last. His salt and pepper hair shaggy and unruly, his scruff giving him a weathered appeal I found some charm in and those mischievous bright blue eyes popping out against his dark features.

“Mistress… welcome!” He shouted his greeting. I couldn’t help but smile and shake my head at how ridiculous and childish his mannerisms could be. “Master Jerry so good to be invited up” I teased back and followed him in.

From there things moved quickly into the next step and I easily fell into sync preparing with the other Mistresses and Masters for the long day ahead. Reading over the weekend set up quickly memorized it and the number of ponies I’d be caring for. Buckling my boots and grabbing my riding crop I headed out to the stables. My ponyboys were already in there gear and had received a feeding earlier before I’d gotten there. Grabbing the necessary reins I headed into the first pen my pony was already on his knee’s awaiting my entrance “What a good boy” I cooed and put the reins on guiding him easily out. It wasn’t a training weekend thus all the ponies knew the proper commands and how to conduct themselves with proper behavior.

None the less the first day always proved to be the longest for me when I was up at the ranch. I put each of my ponies in their proper stalls and checked the chart, one of my ponies needed a milking. Grinning I went a got the gloves and lube. Entering into the stall I moved over to the pony pulling out a sugar cube “Hello Sparkler” he ate the cube and whinnied at my light grazing his hooved foot on the ground. Surprisingly he had a nice sized cock, it was 10 inches and already throbbing with the need to be touched.

I let my fingers teasingly graze over his body not quite giving him what he wanted just yet. His body arched and squirmed and he whinnied and whinnied trying desperately to get me to touch his throbbing meat. Putting on the gloves I stroked his cock nice and slow, teasing him. He jerked his hips nearly loosing balance with his hooves on, it proved high entertaining to tease him and I brought him to the verge and denied him over again until his release erupted from him. The orgasm proved intense knocking him right off his hoofed feet and causing him to pant heavily his body laying prone on the ground.

I stood up and left him that way, a devious smile on my face.

Are you a ponyboy who wants a little pony play time with Mistress?