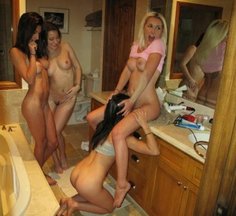 I decided to have a slumber party this past weekend. It was something spontaneous and fun. We’ve been getting a lot of snow around my neck of the woods lately so I and the girls just wanted to have some time to ourselves away from the cold snow. Of course, no slumber party is complete without a game of Kinky Truth or Dare.

Me and my girls decided that we didn’t want to play just any old truth or dare. We wanted to play the sexual version of the game. All questions or dares would have to be of a sexual nature and if someone chose not to answer the question or follow through with the dare they would have to take TWO shots of tequila.

The game started off pretty innocently. The girls were asking some pretty safe questions like;

“When did you lose your virginity?”

“How old were you when you saw a penis for the first time?” Silly little middle school shit like that.

So I decided to kick it up a notch and dig a little deeper. I asked my girl Charity if she had ever fantasized about fucking her dad before. She decided that she didn’t want to answer truthfully so…TWO tequila shots for her!

Every time my turn came around to either ask a question or dare someone to do something I always made sure what I said was extra taboo. My goal was to get the girls as drunk as possible. By the third round of the game, we were all pretty tipsy and lose. I challenged the girls to give me something really sexy to do as a dare when my turn came during the third round. After a couple of minutes my roommate, Hannah finally gave me something that made my pussy quiver.

In her slurred, drunken speech she told me that she dared me to eat out our friend Melissa. Melissa was really hot and I had a girl crush on her since the day that we met. The room immediately burst into wild giggling. No one believed that I would do it. As one of the girls prepared my two shots, I told Melissa to pull down her panties. She squealed a “WHAT!?”, so I repeated myself. “Take off your panties and let me eat that cake!” She started to run around the living room so I chased her to the amusement of the other girls at the slumber party.

I inserted my tongue deeper into Melissa’s pussy. This made her take the back of my head and pull me deeper into her. My mouth was full of her taste and I loved the feeling of her back curving as I played with her asshole. She begged me to stop because she didn’t want to squirt in my face. The more she begged, the more I licked! Her pussy sprayed my face and she came uncontrollably. The room was quiet as she convulsed in my hands. The giggles had turned into moans.