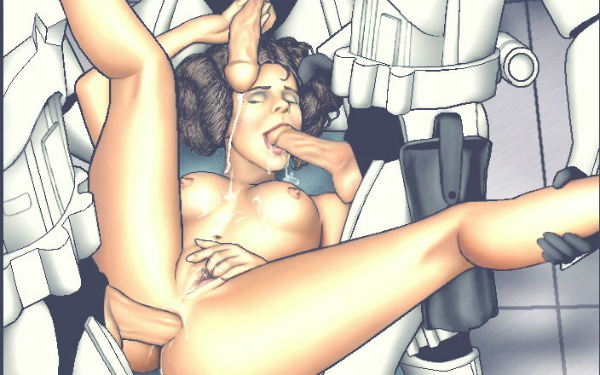 We begin our story on board the Tantive IV, and for all of my sexy little Star Wars nerds out there.. I’m sure you know exactly what happens during this scene. But for all of you, who may not know the story as well..I’ll give your sexy ass’s a brief synopsis.

Princess Leia has been working as a spy for the Rebel Alliance (they are hoping to restore the balance.) Darth Vader has found our dear sweet Leia’s ship, which holds the technical plans for the Death Star. This is bad for him, because with these plans it could potentially lead to the destruction of their precious Death Star, and their weapon. Vader ( as I will be calling him for short) has sent his team of stormtrooper’s on board the Tantive IV to begin eliminating the enemy. Shots have been fired and that’s when Vader enters the ship. He questions one of the crew members and then kills him after not receiving the information needed. So, he sends his team of stormtroopers to find the senator on board.

Enter Princess Leia, she has just sent her sex robots R2D2 and C3Po off the ship with a special message for Obi Wan..and with the plans for the Death Star. As the stormtroopers approach her after finding her, she shoots one in the chest and kills him. Our girl Leia is a strong headed fighter, and will do anything to save her planet…unfortunately after killing the stormtrooper she is surrounded and captured. But the untold part is what happened before they took her to good ole Vader.

Leia is surrounded by stormtroopers at this point, and she knows that she must do something to distract them. Holding her hands in the air she says;

‘Now boys, you don’t want to do this. If you are to kill me, then how will you ever get to fuck me? I mean look at me, do you really want to waste such a perfect ass as this one?’

Leia pulled her dress up to reveal her round ass, perfectly firm from all the running she had been doing quite recently. She watched as the stormtroopers looked from one to the other and nodded their heads. You see, Leia only thought that they wanted to kill her.. Little did she know that their plan the whole time was to keep her alive to receive information from her. But, they were obviously going to enjoy taking full advantage of the situation.

The leader of the pack came closer to Leia and pushed her down to her knees. He watched her from inside his helmet as he unbuckled his pants and brought out his big cock. He loved watching her surprised expression as he stuck his cock deep inside her throat, and he loved it even more watching her as she began sucking and drinking all his juices up. He looked over at the next stormtrooper and nodded his head so that the next one could also stick his cock in her mouth. This went on until Leia had sucked each of their cocks, and had their juices running down her face and onto her white dress.

Like I said.. you need to hold on to your cocks for this series.. cause it’s only going to get dirtier from here 😉