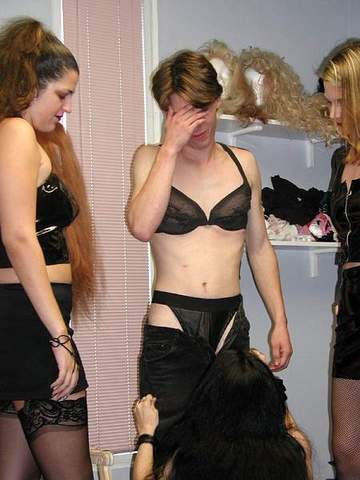 My friend Michael came over. He’s into feminization and I’ve had lots of fun playing with him at home over the last few months. I decided that today we would take it a step further with the pretty boy.
I took him to my room and told him to get undressed. As he did that I went through the backpack he’d brought. I pulled out a navy blue knee length dress, a pair of heels and a brunette wig. I put them on the bed and went to my dresser. I added a pair of pantyhose and a bra to the pile. I watched as he got dressed, I loved seeing him transform from Michael to Michaela. I got out my makeup bag and added a few last touches. I held his face still as I applied mascara then got him to purse his lips so I could put on lipstick. I picked up the wig and placed it on him.

We walked over to the full length mirror so he could admire my handiwork.

Not bad. He could never pass but you could tell that he had made a good effort. I grabbed his hand and left the room. He followed willingly until I got to the front door. He stopped and asked what was going on. I told him I hadn’t spent all this time moulding him into my little doll just so he could hide inside. If he wanted to make me happy then he would follow me. He stepped outside.
We drove to a lingerie store on the outskirts of town. He slowly walked to the door then stopped. I grabbed his arm and marched right inside. A woman walked up to us. She was halfway through greeting us when she stopped. She looked at Michael for a few seconds then asked if she could help us. I told her that my friend needed a new bra, something that was sexy but flattering. She took us over to a rack and said that these might be what we were after. She left us to browse. As she walked away I looked at Michael. His face was beet red. I picked out a bra and sent him to the change rooms. I sat down on a chair near the rooms and gave him a few minutes before saying through the door that I wanted to see how it looked on him. He told me to come in but I said I was fine where I was and for him to come to me.

He came out, dress bunched around his waist and his arm covering up the bra.

I told him to move his arm and come closer so I could get a good look. I got up and made a show of feeling the bra, making sure the cups weren’t too lose and the straps too tight. I could feel the other customers watching us and I said loudly “How do you like this one, Michaela?” He replied “I really like it. I can’t wait to wear it.” He went back in the change room and took it off. We went to the cashier and he handed over his bra. As she rang it up I told Michael how pretty he looked and that it would go nicely with a pair of panties he had at home. The cashier handed him the bag and we went home so he could wear his new bra.
Are you a Pretty Boy? how about some Sissy Phone Sex.