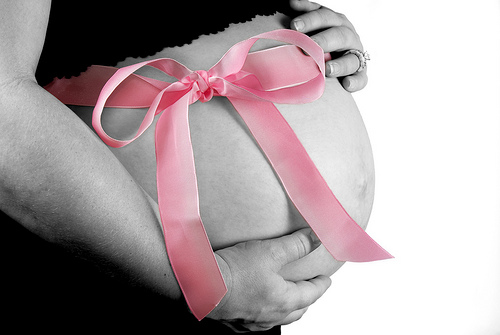 I love Pregnant Sex Stories even though I’ve never been pregnant.

I went over half an hour before he came home from work and we got ready for him. We lit some candles and changed into some sexy lingerie. Hayley wore a black teddy that was split down the front. It showed off her tits and draped her round stomach. She wore a lacy pair of black panties with it and I couldn’t wait to play with her; she looked so hot.

I wore a red bra and thong that I’d bought just for tonight and when we heard his car pull into the driveway we went downstairs together.

We were the first things he saw when he opened the door and he looked so surprised!

He let out a little laugh like he couldn’t believe what he was seeing and asked what we were doing. We were going to give him more Pregnant Sex Stories!

I went over to him and helped him take his jacket off while Hayley kissed him and said that she had a surprise for him. He said he he was liking it so far and we took him to the bedroom. We helped him get undressed, Hayley dealing with his pants and boxers while I took his shirt off then the three of us got on the bed.

I got behind Hayley and put my arms around her stomach, running my hands over it and feeling how big and round it was. She’s been feeling a bit off lately because of the changes in her body and I wanted to let her know she was still sexy so I moaned and started kissing her neck while Josh watched.

Sliding my hands up, I cupped her tits as she leaned into me as I squeezed them, noticing how they’ve gotten bigger. I stopped kissing her long enough to slip off her teddy and she took her panties off while I got on my hands on knees.

Crawling towards Josh I lifted up my knees as Hayley tugged down my panties.

I put my hand around his hard dick and stroked it a few times.  Hayley played with me, taking her time as she undid my bra. “He’s so hard!” I said, gasping as I looked at Hayley and she licked her lips.

She straddled him and I held his dick while she lowered herself on it. I felt her wet pussy brush over my fingers and I let him go. She groaned and started riding him and I watched his dick move in her. I leaned on him, resting on his lower stomach while I held her tit in my hand. It was soft but firm and I stuck my tongue out, flicking it over her nipple as it gently bounced in my hand. I put my lips around it and rubbed my tongue over her nipple, teasing it for a bit. She started gasping and groaning louder and I squeezed her tit as I sucked on her nipple. It bumped against my tongue as she moved and when she came I could feel it go through her.

I popped her nipple out of my mouth and she slid off Josh. I could see her cream pie and helped her lie back so I could get a taste of it.