Playboy Bunny Easter With Mistress London! Do What I Say, Bitch!* 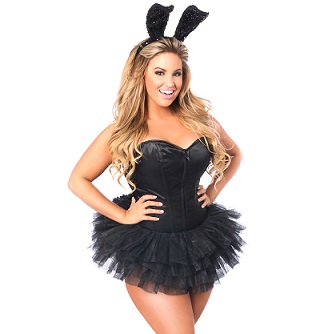 Playboy bunny London. The holidays are my favorite time of year. Christmas, Thanksgiving and of course Easter. No work, lots of socializing with alcoholic libation. Well, not me. Not this Easter. Caught off guard I’d stupidly agreed to help a friend and wine bar owner who had booked a last minute office party. The guests were geeky sounding insurance salesmen. I was told to arrive at 9:30 and dress in a bunny costume. Really?

Browsing online for a costume and wondering how I could keep myself occupied amongst a room full of computer nerds, I found the answer. Maybe this will be ok after all.

I arrived at 9.15 ready for the party in my black silk rabbit costume and the hidden twist. As it happened it was a busy evening and the button on my costume was almost forgotten. That was until my friend took a call, put the keys to the bar in my hand, and ran out the door to a family emergency.

“Lock up will ya? I’ll call you tomorrow”

“WHAT” I yelled but it was too late, she had gone. Looking around, the majority of the party had left except two inebriated twenty-somethings, who seemed very geeky. After fifteen minutes I remembered the button. With a smile on my face, I pressed the on the button which sprang to life the vibrating butt plug attached to the inside of the costume.

Ten minutes of gentle pleasure and still these guys stuck around. An almost evil smile crossed over my face as I said to myself, “they are going to regret this.”

Walking over the guys didn’t notice till I was there.

I said this as I pushed the pair into the door of the storeroom, and in they went. I followed, closing the door behind us and flicked the switch of the plug to full. They halted and looked at me, smiling. They could hear the buzz. Then they looked at me shocked but not as much as they were going to be.

“Clothes off, now. You’re gonna wish you went home.” Shocked the two looked at each other and began to strip.

Standing there butt ass naked the pair covered their modesty with their hands. I began to laugh as I thought of a scenario I wanted to act out.

Watching this with the addition of the plug had me on the verge of gushing, however, I decided to hold off and enjoy my two victims a bit more.

Call me and I’ll be YOUR playboy bunny!