Phone strangers pt. 4: Where was She?* 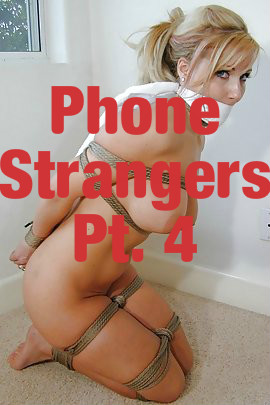 Phone strangers pt. 4: Where was She?

Once I regained consciousness the panic set back in. I looked around the room I was in and there was no one to be found. The gun and the phone were both moved. Even worse, I couldn’t see or hear her anywhere. I started to feel sorry for myself. I was so stupid to have just gone to some guys house that I met at a bar. Then I thought about Aileen and how I dragged her into this when I shouldn’t have. And now I didn’t know where she was, or if she was even alive.

After I was done feeling sorry for myself, I was back to figuring out how to get out of there. They had one of those large clear zip ties tied around my hands and put behind my back. It was so tight I couldn’t even move my hands around. My ankles were also zip-tied together. There were red marks on my ankles from the ties being so tight and I was in a lot of pain.

I heard movement from upstairs, which meant that they were still in the house.

Although there was no sign of Aileen being there still. But I wasn’t just going to lay there and wait for these men to come fuck me up again, I had to try something. So I somehow managed to get up and hop towards the kitchen. I was opening drawers with my hands behind my back, looking for something sharp to cut these ties. There were no knives anywhere, and all the drawers were empty. It looked like the kitchen wasn’t even used. In the last drawer, I checked there was a wine key.

It had that small little blade on it used for taking off the wrapping on the wine bottle. That would have to do, I didn’t have anything else. I took the wine key and popped out the blade. Every Time the blade went across the tie my wrist was rubbed more, bleeding slightly. And after what seemed like an eternity, the zip tie broke and fell off. I immediately started cutting off the zip tie around my ankles too, until that one fell off. I didn’t know what I was going to do at this point, but I started looking around.

Knew I couldn’t just leave. My best friend was in this house somewhere.

I had to find her. I started walking around the house slowly, checking around before I made any movements, wine key still in my hand with the blade out. Then I walked around the entire downstairs and found nothing. This house wasn’t lived in. I knew that now, it was here for a reason. And I wanted to know why. As I was walking beside the steps to look upstairs I noticed a door under the steps. I opened it up and saw concrete steps leading down to a basement. I listened for a second to see if I heard anyone. Once I realized no one was down there, I went down to check it out.

There was a large desk with what looked like hundreds of pictures on the wall. Once I got closer I noticed something about the pictures, They weren’t normal shots of family outings or cute phone selfies. They were all of the females. This must be what Nathan does, Takes pictures on his phone and prints them out for his own amusement.  There were pictures of girls who looked to be very young, naked. Lying on the same couch I was.

Pictures of girls blindfolded with their mouths taped shut being fucked by those men that I saw.

I was spending too much time down there. I had to find my phone and Aileen and get out. As I turned to leave I noticed a new photo in the printer. I assumed it would have been me. So when I went to pick it up I didn’t expect it to be Aileen. She was tied up on a bed with nipple clamps on her nipples and blindfold. I noticed my phone on the desk beside her in this picture. “They have to be upstairs,” I said out loud, to myself. “They are upstairs.” a voice said.

I turned around quickly with that blade still in my hand.

A man stood in front of me. I hadn’t seen him yet, but I was guessing this was who Nathan took the pictures for. He gestured at the stairs and said “Good luck, I won’t stop you. It’s not my job.” And I took off up the stairs. As soon as I turn the handle on the door I heard Aileen scream……….

What happened to her? Find out in pt. 5 of phone strangers

Until then, let’s play PhoneSex!