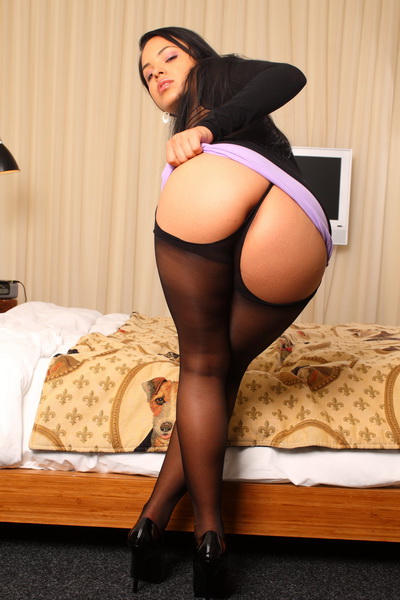 Carmen And The Pathetic Panties Sniffer

The leak in the bathroom faucet was getting worse very quickly. I finally decided to call maintenance to take care of the problem. When I answered the door I was dressed in a pair sweat pants, panties, and a fitted t-shirt. The maintenance guy that came to my “rescue” was the one that was very quiet and looked at me weird whenever I would wash my laundry in the basement.

He gave me the creeps but, I was desperate so I invited him inside. I pointed him towards the bathroom and told him what the problem was. He said he would handle it and it would only take a few minutes. As he worked I decided to make a snack and watch some T.V. About 30 minutes passed and there was still no word from the maintenance man in my bathroom.

“Is everything okay in there!???”, I yelled from the couch. “Yeah. Its cool. The leak is just little worse than I thought.” Finally after an hour he emerged. I laughed because he had a totally different look on his face. He looked like he looked really happy and relaxed when he came out of the bathroom.

“Wow! You must really love working on leaks huh?”, I said with a giggle. He smiled and said he loved his job. Then he left. Leak fixed, life goes on. Not Exactly. Later that evening as I got ready for my shower there was a knock at the door. It was the maintenance guy again. I didn’t care that he saw me in my bath towel. I was just a little upset that he was disturbing my shower time. He said that he forgot to tightened something under the sink and that it would only take him a few minutes to get it done.

Ten minutes went by. 20. 30. 40! Finally I couldn’t take it any more. I tip toed down the hall towards the bathroom. I could hear some movement and other sounds but, something told me that he was in the bathroom doing something weird. As soon as I opened the door, there was the maintenance man, on his hands and knees with a pair of my silk panties up to his nose. I screamed. “What the fuck are you doing??!!!” With the guiltiest look on his face he told me everything:

“I’ve been watching for a long time Carmen. I just knew that your panties would smell so sweet. When I got the maintenance call I knew this would be my only chance to sniff your dirty, smelly panties.”

I laughed so fucking hard I almost passed out! Was this the fucking Twilight Zone? After he confessed to me, he started licking the crotch of my panties and pressing up to his nose. It was the most bizarre thing I’ve ever witnessed in my life! Before he ran out the door he used my panties to jerk his cock off right in front of me. I was yelling for him to stop but, he wouldn’t. It felt to good for him to stop. And something about me watching made him jerk harder.

He blew his load all over my panties and the floor. He said he would do anything for me if I promised not to tell the rental office what he had done. I told him that I would think about it and let him know. What do you think I should do with this pathetic pervert?