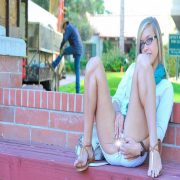 Paraphilia Abnormal Sexual Behaviors are more common than you’d think, to one degree or another. Paraphilias exhibit abnormal sexual behaviors or impulses characterized by intense sexual fantasies and urges that keep coming back. The urges and behaviors may involve unusual objects, activities, or situations that are not usually considered sexually arousing by others. Often, a paraphilia may be necessary for the person who has it to function sexually, despite the fact it may also be a source of significant distress.

Paraphilias can lead to personal, social, and career problems and a person with a paraphilia may be called “kinky” or “perverted.” The associated behaviors may also have serious social and legal consequences. But, Paraphilia Abnormal Sexual Behaviors can get janky!

So, there you have it in a nut-shell.

I was minding my own business walking through a local park and the urge hit me. Now, when I tell you these urges come from nowhere and are strong, that’s not even the half of it! You know that feeling when you feel like a cold wind has blown in and it’s gonna be bad news? Well, maybe you don’t! But, I sure do! And I was looking right down the barrel of one such event. I crept behind a large bush, squatted and pulled my panties down. Now, you may think that because I did this I’m some sort of animal, but it’s out of my control.

I was nearly naked back there and still, I needed more.

Once inside, I threw my clothes on and pulled away, screeching my tires and burning rubber as I sped away.  When I pulled in front of my house I noted that another car pulled up behind me.

Stepping into the darkness and into fear.

He spoke and I froze. His face was kind and I heard him speak and he reassured me that he meant me no harm. I recognized him as the man from the park. He knew all about my condition and he wanted to help me.  I felt compelled to listen. By the time he finished, I knew he meant me no harm, so I listened. He walked me through what he specialized in and told me all about the wild places I can safely have sex with myself, or with a partner and not get caught. My sex life was about to be enhanced!

Don’t knock shit you’ve never tried. May I suggest a small road trip in which you take your shirt, or pants off on the open highway. Flash those tits, or cock or whatever turns you on! Make the world hornier. Plus, a little cheap phone sex never hurt anybody.

Be adventurous. Do the unexpected with me!

Hell, I’ll try anything once. Once, I even tried being an Adult Baby Diaper Lover! I make everything fun, Darlin’! I’m pretty sure I can cajole you into some fun and freaky Paraphilia Abnormal Sexual Behaviors of your own. You never know unless you give it a try. Right?

I’m well versed in all things sexual and I’m ready to get my freak on. Are you? Call me.