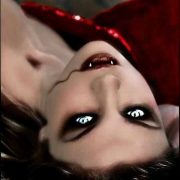 Being a Paranormal Sex Buster can be exhausting. Usually, I go to someone’s house to get rid of a poltergeist or other rambunctious spirit. And, it’s no big deal. But, when a spirit decided to make its way into my home, well let’s just say it was one of my tougher cases. It started with little things. A brooch not being where I put it, my cigar box on a different shelf… You know, stuff like that. But, when I woke up one morning to find the blankets off my bed and folded up on the chair; it was time to take action.
I gathered my totems in a circle around me and went into a meditative trance, opening myself up to the vibrations and emanations from the other side. I felt a chill come over me that made my nipples get rock hard as the entity came into my aura. It was a male presence and I got the distinct impression of violence and loss. Opening myself up, the first impression I got was of the most mesmerizing blue eyes I had ever seen, and before I could fully understand what was happening, I felt the buttons on my shirt come undone and it fell off my shoulders. Paranormal Sex Busting ain’t for prudes. Nor is fetish phone sex!

I felt myself being pushed back onto the floor and my bootie shorts were pulled off as I felt a force spreading my legs apart. Now usually I am pretty choosy about who I spread my legs for, but the need I felt coming from this being was overwhelming. I felt a definite presence enter into the room with me. And I could feel a weight on my body and pressure against my pussy. When you’ve been a Paranormal Sex Buster as long as I have you learn to trust your instincts. In my case, it was the fact that my pussy was dripping wet. I encouraged the spirit that I was willing to be his vessel and no sooner than the thought crossed my mind than I felt a huge pressure pushing into and completely filling up my pussy. Ahh, forced sex!
I’ve got some pretty big toys in my collection. But, none as big as the force that was slamming in and out of me at that moment. Luckily, you learn to adapt in this business. So, I concentrated my talented pussy muscles to accommodate the log that was pushing in and out of me with a force that would have broken a normal girl. Time stops when I’m in these trances. But, after a while, it felt like someone pushed an ice cube into my pussy and the pressure eased off. I guess he had accomplished what he wanted to; because after that things got back to normal in my house, or at least as normal as they ever get for me. When you’re a paranormal sex buster, your life is never really normal.

This Paranormal Sex Buster Does It All Night.

I had a dream later. Which is strange because I don’t usually remember dreams. It kind of went like this… I was approached by a tall, dark man. Speaking to me in Russian, he said “Krasivaya Devushka”, and I knew then that I had given Grigori Yefimovich Rasputin his final fuck. Do you have any spirits you need taken care of? Call Joey, I’m the only Paranormal Sex Buster who guarantees results!!