Pantyhose Fetish He Loves To Wear His Pantyhose!* 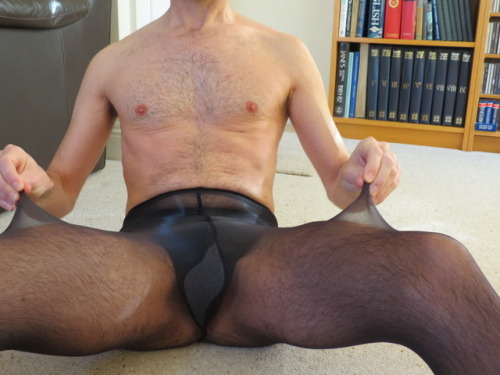 Most guys with a Pantyhose Fetish love it when I wear them because they like rubbing their hands over my soft, slippery legs but Nick likes to be the one who wears them.

His girlfriend and co-workers have no idea about his Pantyhose Fetish and that he buys them online. He ships them to a p.o. box and hides them so he can wear them to work. I’m the only one who knows because he was bored at work a few months ago and messaged me. Now it’s time to have some fun.

He’s just got a new pair of sheer black ones for his Pantyhose Fetish and sent me a pic of him wearing them with a dress shirt and tie. No one would expect such a smart, professional looking man to be wearing those under his dress pants and I told him we were still on for this afternoon.

He sent me a few texts during the day, telling me how he couldn’t wait and how hard I was making him. At lunch, I told him to go into the bathroom and rub his dick through the pantyhose. He did and told me the front of them were soaked with pre-cum.

He was so sure that everyone knew what he was doing and he’d have to sit at his desk all day to hide his hard-on.

Finishing work at 5 and I went to the parking lot where I told him I’d meet him. We had to meet there because his wife was at home and thought he was going to be an hour late because of a meeting. She doesn’t know about his Pantyhose Fetish. This was going to make a great sex story.

He got there a few minutes after I did and parked in the farthest corner. I went over and got in the passenger side while he got his pants down around his ankles. The pantyhose stretched across his hard dick and there was a huge wet patch on the front of them. It’s a good thing he’d worn black pants and a suit jacket otherwise everyone would have seen it.

I put my hands on his thighs and rubbed them slowly, making the pantyhose slide against his skin. “It feels so soft and smooth.” I murmured as he leaned back in the seat.

I avoided his dick and just let him enjoy the feeling the pantyhose made as I massaged his thighs.

After a while I shifted down, keeping my hands moving on him as I put my lips over his dick. I licked him through the thin material before closing my mouth around him and suck him through it. He gasped and pushed up.  I teased him a bit more before I gripped the wet pantyhose in my teeth and tore a hole through them.

Putting his dick through it and spit on it, making it wetter then put my hand around it. I started jerking him off while my other hand went down to his balls, fondling them as I got into a smooth, fast pace.

When he came I jerked him off through it and watched as It splattered over his ruined pantyhose. When he was done I wiped my hand clean on it and left. I hope he’s able to get to the bedroom before his wife sees him because his pants are a wet mess and his dick’s still hard.