Pantyhose Covered Legs are Hot! But I Wanted to Give Him More! ♕ 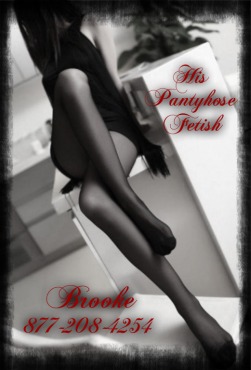 His pantyhose fetish was brought to a new level!

The night I found out that my boyfriend had a pantyhose fetish ended up pretty interesting. It was a normal date night; I was dressed up super sexy when he picked me up. But the look on his face when I opened the door wasn’t just because of my sexy body. I noticed that he kept looking at my legs. When I finally confronted him, he admitted that he had a huge fetish for black pantyhose.

I decided to have a little fun with him and all night long I would find a way to rub my pantyhose covered legs against him. At dinner I took off my heels under the table and rubbed my pantyhose covered foot up his thigh and into his crotch. He put his hand under the table and started to rub my foot. He held it against his hard dick and continued to run his hand up and down the top of my foot.

By the time our date had ended I could tell he was having a really hard time thinking about anything else. We got back to my place and before we could even close the door his mouth was on mine and he was stripping me out of my clothes. I pushed him back and told him to lie down on the bed. Then I took an extra pair of pantyhose from my drawer and began tying his hands to my headboard.

Once I had him stripped down and tied up I used my pantyhose covered feet and legs to tease him over and over. I rubbed against his legs with mine and then stroked his cock with my feet. The feel of my little toes and the silky material on his dick almost made him explode right then. But I told him that if he came, he wouldn’t get any more.

His cock was throbbing as I stood up and stripped out of everything but my black pantyhose. With my pantyhose covered pussy right above his face I grabbed hold of them and tore a little hole right in my crotch. As I straddled him with my silky pantyhose covered legs pressed against his hips and thighs I lowered myself down onto his raging cock.

I slid him into my pussy but I made sure that the hole in my pantyhose was just barely big enough for him to fit through so that he would feel the material wrapped around his dick as he fucked into me. He still couldn’t use his hands and I could tell that he wanted to. He kept tugging his hands against his restraints. I finally let him free as I continued riding his cock.

His hands finally free, he quickly grabbed onto my pantyhose covered ass and gripped tightly. His fingers were digging into the silky material as he fucked up into me harder than ever. As I came all over him I could feel his dick growing harder inside of me and had a new idea. I pulled his dick out of my pussy and slid it between my pantyhose and my pussy through the hole I made in my crotch. I wrapped my hand around his pantyhose-covered cock and continued moving my body up and down as I stroked him.

It didn’t take long for him to start shooting his load into the silky material. I had so much fun with his pantyhose fetish I started asking him about other things that he liked. I wanted to know all of the things that he fantasized about because well, I wanted to make sure he got the best side of all of it! Do you have a pantyhose fetish we can play with? I’m up for anything! Give me a call and let me know what naughty things you just can’t seem to get enough of! I want to explore all of your fetishes with you and make them hotter than you could have ever imagined they could be!