Panty Boys And Toys Is The Perfect Combination For A Fun Filled Night.* 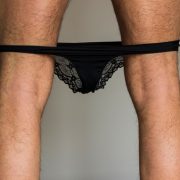 Panty boys and toys. Eve loves her some panty boys and toys, Ther more the merrier. So here is the story. Michael was very generous and bought me some new lingerie, it was so sexy, It was perfect. Perfect for my plan. I had sex up the perfect night without Michael knowing. Everything was set up behind his back, don’t get me wrong this plan is for him too, not just me.

I showed up at his house with my bag of lingerie and toys.

Tonight he will be my panty boy and toys will be his best friend.

He laid on the bed and asked what do you want me to do now? Grabbing the dildo I handed it to him and told him to suck it and deep throat it. The doorbell rings. The look of fright was on his face. No one knows he likes to dress up like panty boys and play with toys. Walking away to answer the door I knew Michaels’ heart was racing. Returning to the bedroom with Mark following me was the perfect beginning to my panty boys and toys night. Micheal had heard many stories about the sexy talk between Mark and I but had never actually met him.

“Michael this is Mark and he is going to dress up and you boys are going to play together.” Michael felt more comfortable now. Now I have the black lace bodysuit and am handing it to Mark to put on.

I sit back and watch them as they are in bed kissing each other passionately.

It is such a turn on to see these two grown men embracing their sexual fetishes with each other. I can see both of their cocks getting harder and harder with every kiss. He grabs Michaels hard cock and began to lick the head of it.

Whispering in his ear Panty boys and toys turn me on I want you to fuck my ass.

One Reply to “Panty Boys And Toys Is The Perfect Combination For A Fun Filled Night.*”