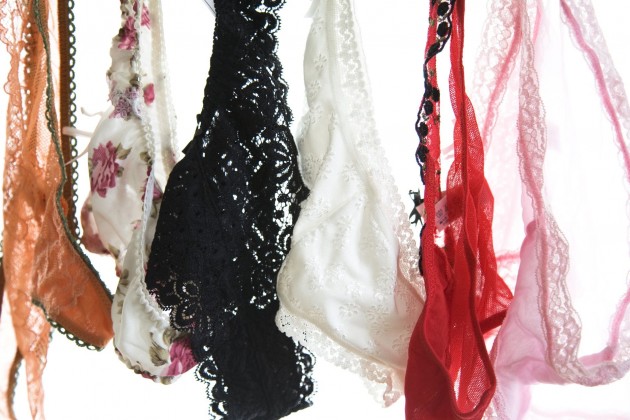 I had noticed panties missing from my bedroom on more than one occasion.  It seemed like  every time I went to get dressed there were more that had disappeared.  At first I didn’t think anything of it.  Maybe they were getting lost in the laundry. Maybe I had one too many drunken nights. Or maybe my roommate, Jess, was stealing them?  Who the hell knows! I brought it up one night when Jess and I were hanging out.  She had panties missing as well. It was time to figure out what the fuck was going on.

We knew we needed to see if anyone was getting into our house.  Luckily, Jess’s sister had a nanny cam she used to spy on her husband and the babysitter.  We set it up in my room and waited.  It only took two days to catch the perverted fuck.  He was rooting through my hamper, hunting for my dirty panties.  When he turned around I was shocked to see a person I knew.

Under the baseball cap was the face of Andy, our next door neighbor.  I can’t say I was surprised.  He was a loner who, I thought, spent all his free time playing video games.  I guess the fucking creep was really sitting around jerking off in my dirty panties.  After informing Jess of what I saw, we devised a plan.

I wanted to catch him red handed!

The video was only a few hours old, so I figured it was as good a time as any to sneak over and peek in his windows.  We headed for the only room with a light on, his living room.  We peeked in and saw him sitting on his couch with panties scattered around him.  He had my black lace panties wrapped around his cock as he slowly jerked off, thoroughly enjoying every stroke.  He picked up a pair neither of us recognized and inhaled them deeply.  Then He began to lick and suck at the center, making sure to clean off every bit of whatever was on them.

When he was finished with that pair, he licked his lips and picked up another.

We sat in the window in disbelief.  Who jerks off in AND licks dirty cum filled panties?  I was going to bang on the window, but I wanted more.  I took out my phone and started recording the sick fuck.  Wondered how many girls he was stealing panties from.  Pair after pair, he licked, sucked, and fucked.  It was like he was savoring each pair.  What a sick, perverted, loser!   No way was he getting away with this shit!  This was the kind of blackmail that could be very lucrative if used correctly.  We headed back to our house and went over the plan for the next day.  This pantie burglar picked the wrong girls!

One Reply to “Panties Burglar: Part 1*”