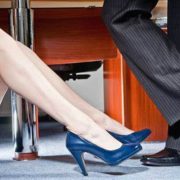 Office sex promotion – I’d been working at the law firm for almost a year now. I was really good at my job, too. I had noticed upon getting hired that I would be one of the only women working there. The aging, gossiping secretaries didn’t count. So I’d told myself that I would prove that you could be sexy AND excel at your job at the same time. Unlike other women, I had no desire to wear ill-fitting jackets and loose pants to attempt to “fit in”.

Here I have to admit that I’d always been attracted to Mr. K. Although I’d sworn to keep things as professional as they could be between us, I couldn’t help but try to get his attention whenever I could. Especially when one day, I heard there was opening for VP of Marketing. The other one had been fired.

So I scheduled a meeting with Mr. K and strutted into his office. Five minutes later, I understood that what he and I fantasized about more or less the same thing. The words ‘office sex promotion’ resonated through his mind, even though he bore an expensive wedding band around his fourth finger.

He didn’t waste telling me the position was mine if I agreed to have sex with him.

Yet I felt the need to resist, for some reason, as I stood up from my chair. Perhaps it’d be sexier that way?

Mr. K. rose from his swivel chair as well. He walked around the desk to meet me, his eyes not leaving mine.

“No.” I breathed deeply, trying to quell my pacing heart.

“No?” he repeated with a smirk. He grinned. “So you don’t want that  VP position?”

He looked me up and down. Mr. K. had a point. If I didn’t dream about this office sex promotion fantasy, why was I dressed so seductively? Underneath a tight blazer, my red dress outlined my feminine curves and bared my decolleté to Mr. K.’s sultry gaze.

My boss wanted me. I could see it in the way he gawked at me every time. It was no secret he was dying to fit his cock between my legs. His desire for my body would work to my advantage.

Asking my sexy boss for the new position would wind up fulfilling my office sex promotion fantasy.

That much I’d known from the start. But something about playing hard to get dampened my panties above my lacy stockings.

His blue eyes kept looking at me. “Really? Think of how much you will gain, Carmen.”

He was close to me now, close enough to touch me. He ran his fingers up my left arm, trailing a fine pattern right up to my shoulder. Shivering, more pussy juices trickled down my legs. I knew this was wrong. Or was it? He was married, but who cared? And what if instead of helping my career, it killed it right there and then? Perhaps diving into my office sex promotion fantasy was a bad idea, after all. But it was hard to ignore the bulge in his pants.

Mr. K. carried on. “Much more money.” He halted behind me, with his other hand finding my right shoulder.

“Bonuses…” he continued. “Not to mention…”

Heat seeped through his palms, drenching me with a burst of perverted desires. He started to knead my shoulders, making me relax into his touch.

“Special attention,” he said. “You’ll get the promotion you seek, if only you give me the sexual pleasures I crave.” He paused. “And that you crave.”

His voice was a husky whisper. “Yes, darling.”

Giving my shoulders a gentle squeeze, he worked his way toward my chest, slowly trailing his fingers across my cleavage. He slipped his palms beneath my dress and cupped my breasts through my strapless lacy bra. I gasped. My nipples were hard and perky, straining against my bra’s lace as he started to knead my bulging tits. I bit my lower lip.

“Say yes to me, Carmen,” he whispered again.

“Mr. K,” I moaned, tilting my head to the left to accommodate his tongue.

I nodded, gripping the armrests of my chair. I would let this man fuck me raw, right here in his office, and with my colleagues right outside, oblivious to our office sex promotion deal. Or maybe not so oblivious. Did it matter, after all?