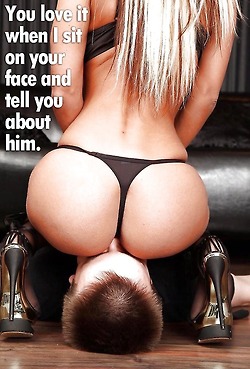 I recently had an old flame reconnect with me when he found out I was single again. We caught up over a phone call, reminisced and laughed at how much we had changed since we had last dated. By the end of the conversation Brian had asked me on a date. I hesitated, hemming and hawing, until he directly asked why I would not give “us” another chance.”Brian, you’re a great guy and we had a nice thing but… I do not we should rekindle it. I am a sexual creature, the sex life we had would not be enough to fulfill me. I would never be able to be faithful to you and right now I’m thinking I want to cuckold you.”

After the clothing was decided he called me into the bathroom where he had drawn a bubble bath and lit candles. I was surprised by this gesture but he explained he really wanted me to enjoy this night and he wanted his goddess to be perfect for my her new lover. The hot bath was so enjoyable as he caressed and cleansed me with the  and shaved my pussy to loving perfection. He even teased me some with his fingers under the warm, soapy water.

By the time Brian dried me off, had rubbed scented lotion all over my sinful body and dressed me; I was so feeling so relaxed and sensual. He sat me on the bed and kissed and caressed me. he then reached in his pocket handed my some money and instructing me what he wanted me what to do next.

“Go out for drinks baby. You are going to have your pick of any man in that room. The one, that looks makes your pussy wettest, bring him home and fuck that hell out of him. Give him everything you got. I will watch from the closet. When he leaves it will be our time and I will care for that tender, used pussy.”

It was maybe two hours before my car was pulling back in my driveway behind Brian’s SUV. The young stud of a man, who also parked his vehicle, had no idea the SUV belonged to someone else. We headed to the front door and I was nervous as I unlocked it. When I walked in the house I saw no sign of Brian, relieved he must have already been in the bedroom closet. I turned my attention to the tall, handsome hunk I had picked up at the bar. I pushed him up against the wall and began kissing his hard and I ran my hands all over his body. I felt a growing bulge pressing against me. “Someone wants to play,” I stated as I drug him towards the bedroom.

The bedroom appeared empty but one closet door across from the bed was slightly ajar. Excited that everything was going so smoothly I started to slowly undress, doing a strip tease for my new play toy. Rubbing up against his as my body became more and more exposed. When I was down to the bra and panties that Brian had to carefully picked out I brought the young man to the foot of the bed. I dropped to my knees and with great enthusiasm gave him a blow job that got his huge dick rock solid. He did not even let me finish sucking him before he was pulling me up and throwing me on the bed, on my hands and knees. I noticed that if he slid in me where I had landed, Brian would only get to see this guy’s ass cheeks as he pumped his dick in me from behind. I quickly shifted so we would be positioned across the foot of the bed and Brian would be able to watch it all. My fuck buddy came up behind my round ass, grabbed my hips and started sliding in my wet and ready fuck hole. His huge hard cock felt so good entering my tight pussy. Brian never made my pussy this pleased. I rocked back into his forward thrusts so his dick would hit harder and deeper. Moaning with the ripples of pleasure this created I pushed my ass higher allowing  him start to pounding that pussy. I pictured the private porno show Brian had a front and center seat to and it was hot! I really liked being fucked by this big delicious, pleasing new cock. But what excited me even more was knowing Brian was hiding in the closet watching me get dicked good and hard,  enjoying every minute of it.